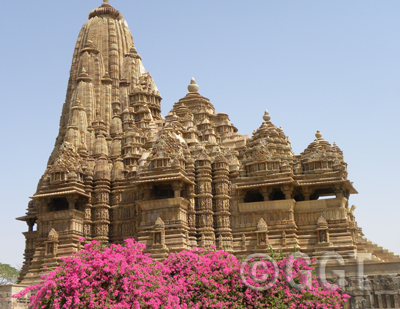 Chandela Temple, Khajuraho, one of the sights on a central India trip (photo by Geringer Global Travel, India tour operator).

One of the most spectacular facets of India—and particularly Central India—is the remarkable diversity of experiences on offer. Imagine it: seeing the palaces of emperors, reflecting the glories of eras gone by, and also the ethereal glow of the Taj Mahal—one of the most beautiful buildings ever created. Then, experience the confluence of history, art and religion in intricately carved temples, before heading off to seek out the captivating animals—from gaurs to tigers—roaming the wilds. From mosques to temples to elegant palaces to wildlife, the variety of moments available on a tour of Central India is virtually unmatched.

Join us on an exploration of India’s vibrant core.  Experience the energy of Delhi, and the iconic grandeur of Agra. Witness the remarkable temple artistry of Orchha and Khajuraho, immerse yourself in the wilds of Bandhavgarh and Satpura, and more. And because you’re traveling with Geringer Global Travel, you’ll not only get to see the sights—you’ll also get to know the culture and meet interesting people along the way.  Set off for a tour in Central India, and get to know the best of this enchanting region.

Day 1: Arrive Delhi
Namaste! Welcome to India!
Delhi stands as the capital of Modern India. The city has seen the rise and fall of many emperors, which has left behind a plethora of monuments that commemorate the grandeur and glory of bygone ages. Very few cities in the world can express such a profusion of architectural styles.

Day 2: Delhi
Experience Old Delhi, from the opulent Red Fort and massive Jama Masjid mosque to the narrow bustling lanes ofChandni Chowk. New Delhi’s Gateway to India and the Presidential Palace showcase modern history, yet the 12th century Qutub Minar and Humayun’s Tomb show that even these parts of Delhi have an ancient past.

Day 3: Delhi – Agra
Agra is home to one of the world’s most famous monuments: the Taj Mahal, seventh wonder of the world and an impeccable ode to undying love.  See the Shah Jahan’s masterpiece and visit the mighty Agra Fort, a massive palace where Mughal emperors lived and ruled for centuries. You’ll also visit Fatehpur Sikri, the short-lived capital of Emperor Akbar that is now a pristine, palatial ghost town.

Day 4: Agra – Jhansi – Orcha
Take the train to Jhansi, and then travel onward to Orchha, the former capital of Bundela rulers. Orchha features a collection of impressively well-preserved 16th century palaces, many of which are still visited regularly by thousands of devotees.

Day 5: Orcha – Khajuraho
Drive to Khajuraho, home of the world-famous Kama Sutra carvings. Visit the Chandela Temple Complex, a stunning example of Indian architectural styles that has gained popularity due to their salacious depiction of the traditional way of life during medieval times. Later, soak in the spectacular Light and Sound show at the temple site.

Day 6: Khajuraho – Bandhavgarh
Today, you drive to Bandhavgarh, known for having the highest density of tigers in the world. Check into your lodge and enjoy the rest of the day at leisure.

Day 7: Bandhavgarh
Explore the park on morning and evening game safaris. The park is home to 22 species of wildlife, including the regal gaur, many varieties of deer, the striped hyena, jungle cat, sloth bear and over 250 species of birds. The ruins of Bandhavgarh Fort hover mightily over the park, and are now largely overrun by the surrounding forest.

Day 8: Bandhavgarh
Discover more wildlife in the park on morning and afternoon game drives today. In between, take a walk through the humble dwellings of Tala Village, allowing you a glimpse at a day in the life of an Indian village.

Day 9: Bandhavgarh – Jabalpur
This morning offers more opportunities to discover this renowned wildlife haven. In the afternoon, drive to Jabalpur where you can unwind.

Day 10: Jabalpur – Satpura
Make your way to another prime wildlife habitat: Satpura National Park, one of India’s best-kept secrets. Apart from jeep, elephant and boat safaris, Satpura is the only park of its kind in Central India that offers walking safaris, giving enthusiasts a thrilling opportunity to explore tiger country on foot.   While here, you might spot leopard, sloth bear, wild dogs, gaur, sambhar and, if you’re lucky, the magnificent tiger.

Day 11: Satpura
Explore this off-the-beaten-path gem in the morning and the afternoon. The elephant safari is particularly interesting: being atop this massive creature is an experience unlike any other, and a superb way to immerse yourself in this wilderness. You may witness the bird life along the river as well.

Day 12: Satpura
You have yet another full day to explore the park. Alternatively, you can choose to visit some of the nearby tribal villages, getting a sense of the everyday life of the native people.

Day 13: Satpura – Maheswar
Onward you travel on your Central India tour, as you make our way to Maheswar, an ancient city on the banks of the sacred Narmada River. Explore the city’s ghats, visit some of the local artisans at the Rehwa Society (famous for textiles) and see some of the unique hand-woven sarees (called Maheshwari) that are made here.

Day 14: Maheswar – Mandu – Maheshwar
Discover Mandu, which was once the largest fortified city on the planet. A series of ancient rulers built elaborate palaces like the Jahaz and Hindola Mahals, as well canals and pavilions. You’ll gain insights into the history of this place once called “City of Joy” before heading back to Maheswar.

Day 15: Maheshwar – Bhopal
Situated on the site of an 11th century city, Bhopal is a city of old mosques and regal palaces, yet it also is a vibrant modernity to it. The “new” city has an inviting collection of parks, gardens, broad avenues and modern buildings that complement its ancient past.

Day 16: Bhopal
Today, get to know Sanchi, home to Sanchi Stupa a shining example of the artistic acumen of Buddhist monks. You can see how Buddhist architecture and sculpture evolved between the 3rd century BC and the 12th century A.D. Later, see the State Museum, the Taj-ul-Masajid mosque and Big Lake in Bhopal.

Day 17: Bhopal – Delhi
This morning, your tour of Central India draws to a close, but not before you see the cave paintings in Bhimbetka. These paintings date to the Neolithic era, each depicting the life of prehistoric cave-dwelling humans. In the evening, you’ll fly to Delhi and transfer to the International airport for your flight home.

This is a suggested Central India itinerary—we’d be happy to customize an itinerary to fit your needs. Whether you prefer a shorter or longer journey, would like to include other parts of India or simply need something to fit your budget, please contact us at 877-255-7438 or email us at info@geringerglobaltravel.com to discuss how we can create a personalized India tour for you.