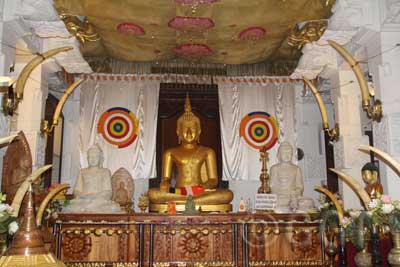 Though separated from India by a narrow strait, Sri Lanka nonetheless has a personality all its own that enraptures those who visit. This is an ancient island with a deeply spiritual sensibility, captivating historical monuments and friendly people who make visitors feel welcome from the moment they arrive. Join us as we experience the best of the “teardrop of India” on this invigorating tour to Sri Lanka.

On this Sri Lanka tour, you’ll visit UNESCO World Heritage sites, spiritual mountains and sacred temples, like the Temple of the Tooth. You’ll trek through wild landscapes, enjoy a relaxing boat ride and witness elaborate cultural dances.  See the tea-making process firsthand, visit an elephant orphanage and enjoy the pulse-pounding thrill of a safari in Yala National Park. The variety of experiences on a tour of Sri Lanka is thrilling—join Geringer Global Travel and get to know this incomparable isle.

Day 1: Airport  – Anuradhapura
Arrive in Anuradhapura, a UNESCO World Heritage Site that was the first capital of Sri Lanka (from the 5th century BC to the 9th century AD). As the epicenter of Buddhist culture here and the most impressive city of ancient Sri Lanka, this is truly a fascinating city in which to begin your time in Sri Lanka.  Enjoy free time to relax after your journey.

Day 2: Anuradhapura  – Mihintale  – Anuradhapura
After breakfast, start your sightseeing tour of Anuradhapura, home to some of the island’s oldest Buddhist shrines. You’ll visit the Brazen Palace (2nd century BC), the Ruwanweli Seya (also 2nd century BC) as well as the Samadhi Buddha—regarded as the finest rock sculpture of Sri Lankan antiquity—and much more. Later, you’ll proceed toMihintale, a mountain of great spiritual significance to Buddhists because it was the place where Buddhism was introduced to Sri Lanka.

Day 3: Anuradhapura  – Sigiriya  – Harbarana
Set off for Sigiriya, a rock fortress where King Kashyapa built his fortified palace in the 5th century. Climb to the summit, where you’ll see the remains of the grand palace of Kashyapa. Later, visit the local village of Hiriwadunna, where you’ll see a cooking demonstration and then enjoy lunch with a local family. In the afternoon, embark on invigorating trek to a village—where you can get a sense of daily life in Sri Lanka—and then enjoy a ride on a traditional boat.

Day 4: Habarana  – Polonnaruwa  – Habarana
After breakfast, depart for Polonnaruwa, capital of Sri Lanka from the 11th to 13th century. See the Gal Vihara—a monument with stunningly carved images of the Buddha—as well as some impressive medieval Buddhist art at theTivanka Image House. In the afternoon, embark on an elephant-back safari through the dense shrub forests, keeping an eye out for wildlife before enjoying stopping for a refreshing drink at a local farm.

Day 5: Habarana  – Dambulla  – Matale  – Kandy
Stop at the Dambulla Rock Cave—a series of caves-turned-shrines from the 1st century BC—and the Dambulla Market en route to Kandy. Visit spice gardens and enjoy a sightseeing tour of this popular destination before taking in a cultural dance show. You’ll get a chance to see some captivating dances, including a peacock dance, a fire dance and a harvest dance. Perhaps the most memorable moments of your stay in Kandy will be at the Sacred Temple of the Tooth, which is said to house a tooth of the Buddha and is one of the holiest Buddhist sites in the world.

DAY 6: Kandy – Pinnawela  – Kandy
Stop by the Pinnawela Elephant Orphanage today, where you’ll meet some of the 60 – 70 elephants and perhaps even seen the baby elephants being fed. Return to Kandy and visit the 147-acre Royal Botanical Gardens, which—in addition to housing a dizzying variety of plants and flowers—was one the headquarters of Lord Mountbatten during the Second World War.  Your evening is at leisure.

Day 7: Kandy – Nuwara Eliya
After breakfast, you’ll explore a tea plantation and factory at Nuwara Eliya, which is the heart of Sri Lankan hill country. The lush tea plantations, along with gushing streams, tumbling cascades and a distinctly British character, make this a unique place to explore. You’ll tour the factory and get a chance to sample the tea as soon as it is produced.

Day 8: Nuwara Eliya  – Horton Plains  – Yala
Your tour in Sri Lanka continues as you travel through mountain roads to Horton Plains, where you’ll enjoy a leisurely trek. You may spy some wildlife as you wander past Baker’s Falls, an impressive cataract in these beguiling wilds.

DAY 9: Yala National Park – Katharagama
You’ll embark on an exploration Yala National Park in a 4×4 jeep today. You’ll get a chance to see the captivating array of wildlife here, including deer, rabbit,  sambas, wild boars,  elephants and, if you’re lucky, an Asian black bear or leopard.

DAY 10: Yala – Galle
Travel to the port of Galle today, and see the pervasive influence of the Dutch here. The 89-acre Dutch Fort, built in the 17th century, is still an imposing presence. You’ll see the Dutch houses, museums and churches sheltered and hear the echoes of history within its walls.

DAY 11: Galle
After breakfast at the hotel, the day is yours to do as you wish. The beach may beckon—you can relax at Unuwatuna,Wellgama or Tangalla beaches.

DAY 12: Galle – Colombo
Make your way to Colombo, a fascinating city with a thrilling East-meets-West charm.

You can explore this capital, taking in the Buddhist and Hindu temples, the historic Wolfendhal church, theCinnamon Gardens and more.

DAY 13: Depart Colombo
Your Sri Lanka tour concludes as you make your way to the international airport for your flight home.

This itinerary is merely a suggestion–we’d be happy to customize your Sri Lanka tour to incorporate your budget, dates, hotels and length of time in Sri Lanka that work for you. Give us a call at 877-255-7438 or email us atinfo@geringerglobaltravel.com to discuss how we can create an extraordinary Sri Lanka vacation for you.