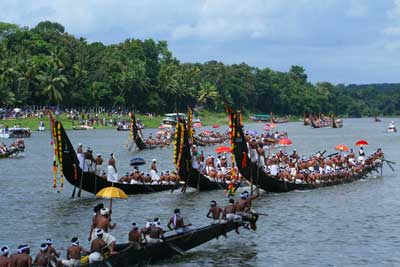 India is bursting with energy at any time of year, but it is during the annual festivals here that you will truly see the country’s vibrant character coming through. Some of the most famous festivals in the world—including Holi, Diwali and the Pushkar Fair—happen to take place here, but you can also find lesser known celebrations that are just as captivating. Enrich your journey by experiencing an India festival.

Here is just a sampling of the festivals you may want to include in an India trip.

Camel Festival – Bikaner
Built entirely around the legendary camel—so important to the people of this region—the Camel Festival is an unusual event in January that includes races, performances and competitions. In addition, there are fire dances and other cultural performances, and this event offers travelers an excellent opportunity to interact with locals.

Champakulam Boat Race – Kerala
The Champakulam Boat Race is the oldest and most famous snake boat race in Kerala during June or July. Prior to the races (which include several categories for different kinds of boats), onlookers can admire the brightly decorated boats and enjoy various performances by artists.

Chennai Dance and Music Festival
This India festival lasts a month (December – January), during which there are dance and music performances all over this vibrant city. The concerts include vocal and instrumental music along with solo and group dance performances, and can feature everyone from up-and-coming amateurs to world-famous artists.

Desert Festival – Jaisalmer
This celebration of the desert is perfectly placed in arid Jaisalmer. Held in February, the three-day celebration includes gymnastics, snake charming, puppet shows and folk music performances, as well as a turban-tying competition and camel dancing.

Diwali – Festival of Lights
Diwali is a festival of light celebrating the triumph of good over evil. In this most important of Hindu festivals, small clay lamps are lit and kept on during the night in order to make the goddess Lakshmi feel welcome. During Diwali (October or November) all the celebrants wear new clothes and share sweets and snacks with family members and friends. In addition, firecrackers are set off because it is believed that it drives away evil spirits.

Elephant Festival – Jaipur
Celebrated at the same time as Holi (in March), the Elephant Festival in Jaipur features events built around the popular pachyderm: races, polo-matches, a tug-of-war with men and even a ‘Best Decorated Elephant’ contest.

Ellora Festival – Ellora
Set against the backdrop of the iconic Ellora Caves, this March festival focuses on classical music and dance. It is a once-in-a-lifetime opportunity to see world-class art at a truly beautiful site of cultural and sculptural wonders.

Goa Carnival – Goa
Held every year in February, the Carnival of Goa is a raucous celebration in the spirit of similar pre-Lenten festivals around the world. People of all backgrounds and religions converge to have fun at this event, which starts with a brilliant parade of colorful floats and continues with singing, dancing and general merriment.

Hampi Dance Festival – Hampi
This festival among the ruins of the Vijayanagar Empire takes place in the first week of December. A celebration of art, dance, music and drama, the event also features fireworks, puppet shows and processions—all in a singular environment of 15th century ruins.

Hemis Festival – Hemis, Ladakh
During this festival that celebrates the birth of Guru Padmasambhava, monks perform elaborate masked dances and dramatic plays to the accompaniment of local music. Charming handicrafts are another highlight of this cultural spectacle in June or July.

Holi – Festival of Colors
Holi is the “Festival of Colors” and marks the beginning of spring. On the eve of Holi, a massive bonfire is lit; then, on the morning of the festival, people eat sweets together and douse each other in colored powders and water. Holi is in March and is one of the most joyous of Indian festivals.

Khajuraho Festival – Khajuraho
Every February or March, the people of Khajuraho celebrate the rich tradition of classical dances like Kathak, Bharatnatyam, Kuchipudi, Odissi, Manipuri, and many more. To make it even more beautiful, it is set against the backdrop of the city’s awe-inspiring temples.

Konark Dance Festival – Konark
Witness various dance forms of India in the open-air theater at the Sun Temple of Konark. Enjoy the dances, arts and crafts and fascinating sights of this region while reveling in the cultural display all around you in December.

Mahabalipuram Dance Festival – Mahabalipuram
This world-renowned event brings together artists from all over India to perform their traditional dances. Held in December and January, the festival includes performances of classical dances like Bharatnatyam, Kuchipuri and Kathakali, as well as folk dances.

Marwar Festival – Johdpur
This annual event highlights the art and culture of the Jodhpur region. Singers and dancers bring the myths and legends of the area to life, celebrating the heroes and triumphs of the past. This two-day festival, held in October, also includes polo and other horse events.

Nagaur Festival – Nagaur
This four-day festival in February includes folk music, tugs-of-war, camel races and other entertaining activities. Visitors stay in tents, and can enjoy fun cultural activities like taking an elephant or camel ride and enjoying a cup of tea with locals.

Onam Festival – Kerala
Falling in August and September, this 10-day harvest festival is centered around, well, almost everything: religion, food, music, dance, sports, snake boat races (including a boat rowed by 150 men) and more. This is generally a time for people to be thankful for the harvest and to celebrate the year’s blessings.

Pushkar Fair – Pushkar
Every year around the full moon in October or November, thousands of devotees gather around the sacred Pushkar Lake and bathe themselves. It is all a part of this massive, world-famous event known for fascinating spectacles like puppet shows, a cattle auction and camel races.

Republic Day – Delhi
Patriotism reaches its peak in India on January 26th each year as the country celebrates its independence on Republic Day. On this date in 1950, the Indian republic was born, and—in addition to celebrations all over the country—a grand parade is held in the capital, New Delhi.

World Sufi Spirit Festival – Johdpur and Nagaur
Sufi artists are celebrated at this February event every year. Artists come from Iran, Egypt, China, Mongolia, Pakistan, India, to join in Sufi concerts and lectures, as well as yoga, workshops and much more.

Enrich your tour in India—and immerse yourself in the local culture—by experiencing an authentic local festival. Depending on when you plan to travel, we can customize your India itinerary to include a fair, festival or cultural celebration. Contact Geringer Global Travel at 877-255-7438 or email us at info@34.207.230.29 to discuss how we can create a personalized India tour for you.