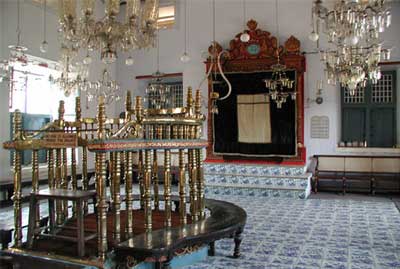 Anti-Semitism has been an abidingly heartbreaking force in human history. Over millennia, Jewish people have been expelled from eighty countries, and have been the targets of persecution throughout the world. One of the only countries that has seen a continuously warm welcome for Jewish people is India.

Religious tolerance has been a hallmark of Indian life, and Jews have been living here peacefully for millennia. The Bene Israel group, according to the Jewish genealogical journal Avotaynu, “flourished for 2,400 years in a tolerant land that has never known anti-Semitism, and were successful in all aspects of the socio-economic and cultural life of the people of the region.”

Many Jews departed after the creation of Israel, so today India has a very small Jewish community—only 6,000 in a country of one billion people. Yet it remains a fascinating glimpse into one section of the Jewish diaspora. This in-depth India tour takes you into the heart of Judaic India, showing you the history, culture and impact of the Jewish people here.

Day 1: Arrive Mumbai
Namaste! Welcome to India!
Once nothing more than a swampy and malarial mud flat—presented to the British by its Portuguese occupiers as a wedding gift in 1661—Mumbai (still often called Bombay) is the fastest-moving city in India.  You’ll discover the city and its unique Jewish heritage.

Day 2: Mumbai
Discover the Keneseth Eliyahoo Synagogue and the Magen David Synagogue, both built in the 1800s by the Sassoon family. You’ll also visit the iconic Gateway of India, scenic Marine Drive, Jain Temples, and the Parsi Tower of Silence.

Day 3: Mumbai
Explore Alibagh on the Konkan Coast.  During the religious persecutions in Israel 2,200 years ago, the Bene Israel Jews escaped to India. We will visit the unusually picturesque synagogue at Alibag and get to know the culture of this unique city.

Day 4: Mumbai
Travel to Elephanta Island, famous for its ancient cave temples, and later marvel at the efficiency of Mumbai’s 4,500dabbawalas, who pick up and deliver 175,000 lunches every day. Also, visit the buzzing local bazaars, hubs of daily activity here.

Day 5: Mumbai – Cochin
Today, enjoy a poignant visit to the JDC Old Age Home, which has been helping elderly and destitute Jewish people since 1964. Then fly to Cochin (also called Kochi), once a key stop on the trade route between Europe and China. Over the years, Jews built strong communities here, and we’ll explore it over the next three days.

Day 6: Cochin
Enjoy a sightseeing tour of Cochin, including the Jewish Paradesi Synagogue (built circa 1568), one of the most beautiful Jewish sites in India. Later discover Chinese Fishing Nets—said to be brought here by traders of Kubalai Khan’s Court—and St. Francis Church, the oldest church built by the Europeans in India.

Day 7: Cochin
Delve deeper into Jewish life as you explore Thekkumbhagam Synagogue, and Muziris, Parur Synagogue and stop by the former Jewish settlement in Mala. Visit the synagogue and cemetery—reminders of a time when this was a thriving, artistically inclined Jewish community.

Day 8: Cochin – Kolkata
Fly to Kolkata (Calcutta), home to a tiny Jewish community with a proud history (there were once 6,000 Jews here, but numbers dwindled after the formation of Israel).  Echoes of this past remain, and we’ll discover the remnants of Jewish past here.

Day 9: Kolkata
Browse Nahoum’s Confectionary Shop, and recall its glory days at the beginning of the 20th century. Tour “Magen David” (Star of David), acknowledged to be the largest synagogue in the East, as well as two Free Schools and a Jewish hospital.

Day 10: Kolkata
A glimpse of Indian cultural sights provides some context: stop by the Dakshineswar Kali Temple and Victoria Memorial, as well as St Paul’s Cathedral (the original metropolitan church of British India) and Sishu Bhavan, one ofMother Theresa’s many homes for the underprivileged.

Day 11: Kolkata – Delhi
Fly to Delhi, an amalgamation of cities created from the 11th to 20th centuries. Delhi has seen the rise and fall of many emperors who have left behind striking monuments and riveting tales. Experience the many facets of this captivating capital—both the modern and the ancient—as you explore both New and Old Delhi.

Day 12: Delhi
Explore Judah Hyam Synagogue, and meet with the caretaker to get an insider’s view of the congregation’s history.  Later, experience both Old Delhi and New Delhi on a tour, and immerse yourself in the grand history from the overwhelmingly opulent Red Fort to the 12th century stone tower Qutub Minar.

Day 13: Delhi – Agra
Drive to Agra, home to the venerable Taj Mahal. Visit the mighty Agra Fort, a massive palace where Mughal emperors lived and ruled for centuries, and stroll through Kachhpura village to Mehtab Bagh, a Mughal-era garden. See the Taj Mahal at sunset.

Day 14: Agra  – Jaipur
You’ll catch the magic of the Taj Mahal at dawn, when the sun gently graces the etched marble, painting it in hues of pink, light yellow and bright white. Later, see palatial ghost town of Fatehpur Sikri before arriving in Jaipur, the “Pink City.”

Day 15: Jaipur
Ascend to the towering Amber Fort on elephant back, before getting a in-depth tour of this Rajasthani capital. The“Palace of Winds” awaits, as well as the elaborate and ornate City Palace and more. Later, enjoy an authentic Indian cuisine demonstration and dinner with a special local family.

Day 16: Jaipur – Delhi – Depart for Home
Drive back to Delhi, where you’ll say your reluctant goodbyes to your tour to India and fly home.

This is just a suggested itinerary—we’d be happy to customize an itinerary to fit your needs. Whether you’d like to choose your own dates, would prefer a shorter or longer journey, would like to mix and match accommodations or simply need something to fit your budget, please contact us at 877.255.7438 or email us at info@geringerglobaltravel.com to discuss how we can create a personalized India tour for you.