By distinct destinationsNovember 21, 2022No Comments

One of the most iconic features of Bhutan’s architectural grammar is the dzong, what the world knows as a fortress. Bhutan’s dzongs are a characteristic attraction of the country’s tourism landscape and it would be a rare visit when one does not explore one of these forbidding structures. The dzongs which feature traditional Bhutanese woodwork and (often) Buddhist artworks have been an intrinsic component of Bhutan’s history and culture since the unification of the country. Important national treasures inherited from antiquity are also housed in some of the dzongs.

Long recognised as impressive strongholds that were symbols of power and triumph over enemies in the past, Bhutan’s dzongs, sheltering Buddhist lamas, government officials, and artisans are fortified buildings that serve both as spiritual and temporal spaces. As described by the UNESCO website: “Most of the Dzongs were built to be strategic footholds for gaining influence of particular Buddhist schools and controlling over the region under the power of the schools. It is said to be the medieval period in the 12th century when Dzongs were started to be built in “the southern land (Bhutan)” by clergies of different Buddhist schools established in Tibet.” 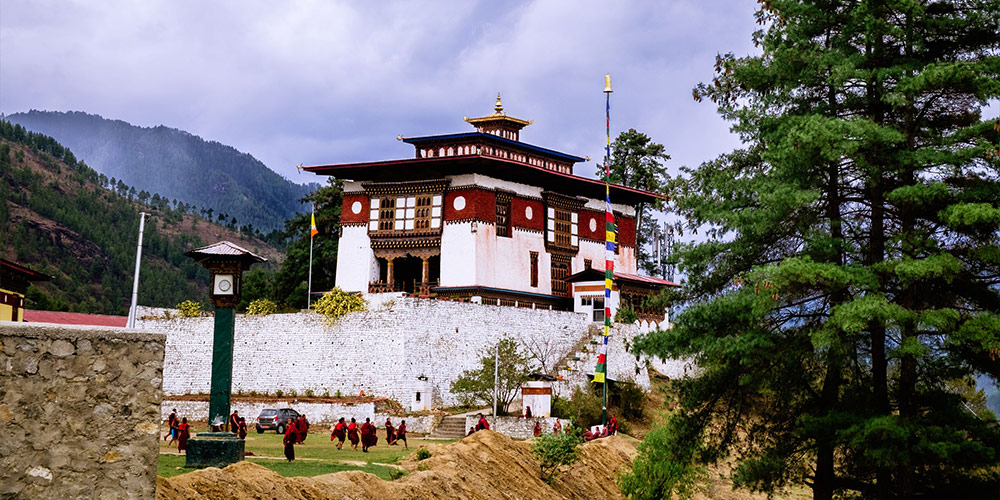 So it’s quite interesting on a visit to see how neatly they have embraced dedicated places for both religious pursuits and the administrative needs of local governments. Scattered across the country are a string of dzongs. The strategic location of these fortresses served as an important component in the successful unification of the country. Attached to many of these dzongs are riveting narratives of history, myths and legends, which make a visit so rewarding. Even today, the relevance of the dzongs has not been watered down an iota, and they continue to serve as the centre of temporal and religious authorities amid rapid socio-economic development in modern times. The principal dzongs still play host to the offices of the respective district authority, several shrines, and the residence of the district monk body.

Punthang Dechenphodrang Dzong in Punakha, built in 1637 by Ngawang Namgyal, was the primary seat of Drukpa-Kagyud Buddhist School and was also the host for the Central Government offices. Punakha Dzong is situated at the confluence of the Pho Chhu (father) and Mo Chhu (mother) rivers in the Punakha–Wangdue valley. The importance of this dzong, which features three courtyards, is also because it was the birthplace of Bhutan’s monarchy, marked by the ostentatious enthronement of Bhutan’s first king in 1097. In 1955, the administrative centre of the government was shifted from here to Thimphu, the new capital. 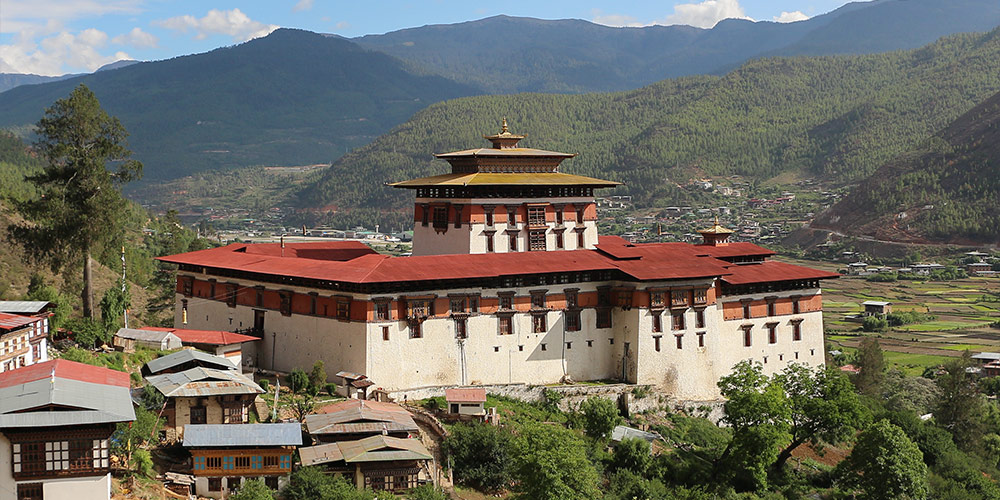 In the spring, the surrounding jacaranda tree area riot of colour enhancing the pristine white structure of the dzong. You will be entranced by the vivid murals illuminating the interior walls. The third courtyard is significant for the dzong’s main shrine and the hundred pillared assembly hall. The dzong is also significant for the sacred relics of the southern Drukpa Kagyu School, the Rangjung Kasarpani, and the sacred remains of Zhabdrung Ngawang Namgyal and Terton Padma Lingpa, that are sequestered here.

Rinchenpung Dzong in Paro, was built in 1646, and administered the western regions in Bhutan. Remarkable for its traditional Bhutanese architecture, Paro Dzong is approached by a wooden cantilevered bridge set across the Paro Chhu River. Its monastic complex reflects its Drukpa School of Buddhism ancestry. Though it’s not possible to explore the shrines and chambers within, as they are closed to the public, the central courtyard plays host to the riveting annual religious festival Paro Tshechu in spring, attended by large throngs of visitors. 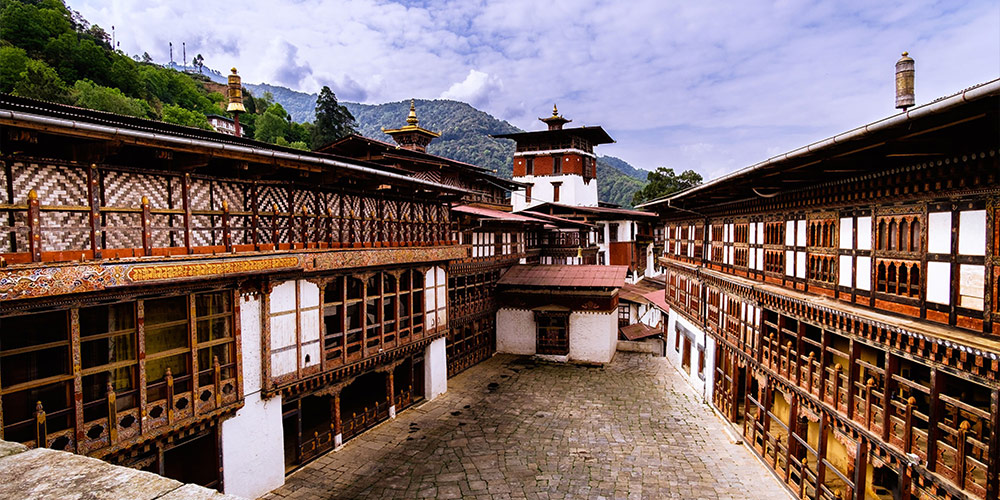 Trongsa Dzong was built in 1647 on the banks of the Mangde River, and served the administrative duties for the eastern regions. This superb fortress, the largest in Bhutan, should definitely be on your bucket list. For one, the drive to Trongsa takes you through some unbelievably beautiful tracts of Bhutan’s legendary natural heritage. The scenic splendor of Trongsa Dzong’s surrounds is heightened by the glorious backdrop of the Himalayan pinnacles. The rich expanses of greenery act as a wonderful foil to the pristine white painted fortress. As the official headquarters of the governance of Trongsa district, the dzong is a hub of administrative duties and is always abuzz with officials caught up in all manner of officialdom and public dealing. There’s also a calmer side to the dzong, which is reflected by its monastic complex, a home to about 200 Buddhist monks. You should browse through the collection of royal memorabilia and Buddhist art in the museum in the watchtower. Do take time to soak in the glorious valley views from this delightful perch.

Thimphu’s Tashichho Dzong dates back to the 17th century and serves now as the royal secretariat and the country’s seat of governance since 1968. The present structure, created after numerous renovations and modernization of disassembled, severely damaged old dzong, was commissioned in 1965 by the Third King of Bhutan Jigme Dorji Wangchuck. Sequestered in this massive edifice is the Golden Throne Room, the Office of His Majesty the King, and the offices of the government. It’s also the summertime abode of His Holiness the Je Khenpo and Central Monastic.Do stop and marvel here at the gilded worksmanship which decorates the skirting of the statue of the Shakyamuni Buddha, the fantastic traditional Bhutanese wood carvings and the beautiful mandalas. Amongst the numerous sacred treasures housed here are the entire sets of the manuscripts written in gold, of the Kanjur and the Tenjur, the former being the ‘translated words’ of the Buddha and the latter, commentaries on those teachings. 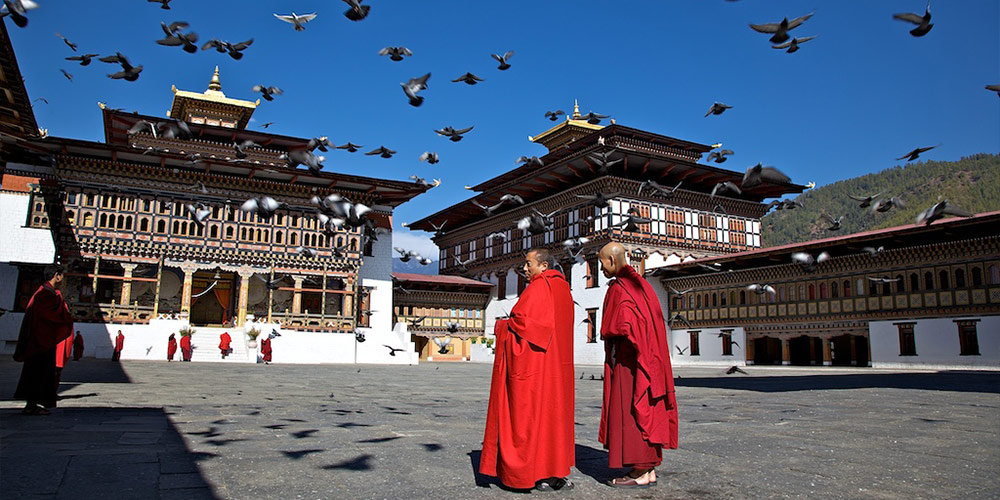 While these three dzongs should be on your must-visit list while travelling through Bhutan, there are many others which offer you interesting insights into the importance of these fortresses and their significance to the country’s historical-cultural landscape.