Kerala Churches: The Miracle of Faith and Healing

By distinct destinationsSeptember 2, 2022No Comments

Isn’t it amazing that one of the leading personalities from the saga of Jesus Christ’s inner circle stepped out of the New Testament, became flesh and blood and actually arrived on the shores of India by boat from Palestine in 52 CE to preach the gospel of Christ?

Yes! ‘Doubting Thomas’, who refused to believe that Christ had risen from the grave, became one of his greatest advocates and in time arrived at the Indian port town of Kodilingapuram (Cranganore) an entry point for the Kerala backwaters on the Malabar Coast to spread the faith. Deep in the backwaters are ancient villages where some of the elders still cling to the songs and ballads, a rich and precious repertoire recounting the travels and miraculous deeds of St Thomas. This important legacy of oral traditions is captured in the epic ballad The Margam Kali Pattu, or Song of the Way. These early Christians call themselves St Thomas Christians (or Syrian Christians), as opposed to the form of Christianity brought to India in the 16th century by the Portuguese, who called the St Thomas Christians heretics and went on to destroy all historical documentation of their faith.

St Thomas spent several years here spreading the faith in Kerala. During his mission here, he converted 12 Brahmin families and many locals to this Jewish-strain of Christianity. He also helped set up churches in seven places–Maliankara (Kodungallur, the ancient Muziris), Kollam, Niranam, Nilakkal, Kokkamangalam, Paravur and Palayur. Later, St Thomas was moved on to the eastern coast to Mylapore (Chennai) to continue his missionary work. It was here he was martyred at the hands of some jealous local Brahmins. To this day, streams of devotees visit his tomb, which was established here at Mylapore. Devotees of St Thomas in Kerala have an undying faith in his powers of healing and helping them in times of need.

St. Thomas has left behind a powerful legacy of Christianity’s healing powers in Kerala. Over the centuries, its Christian populace has embraced this great spiritual tradition, which has been preserved as a living organism in churches scattered across the state. 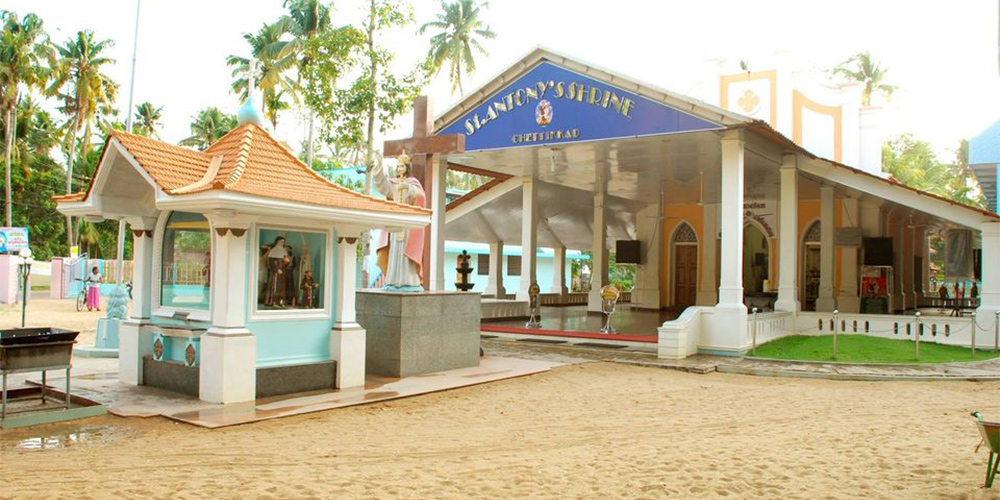 St Anthony ‘The Miracle Man’ plays a pivotal role for his devotees to intercede with God on behalf of those who are ill, childless, plagued by misfortune and stricken by terminal diseases. The power of the church, located in North Paravur, in Ernakulam district, also comes from three relics enshrined here that are directly related to the saint; one of these is a small part of his tongue. Curative powers are believed to be embodied in the waters of the well here. The church is known for its miracles related to sick children. Special healing services take place at the shrine on the first Tuesday of every month.

St. George Forane Church, Edathua Dating back to the year 1810, this serene church, dedicated to St George, stands on the banks of the Pamba River, 24km away from the town of Alappuzha. It has long been famous for its miraculous powers for curing mental ailments and other diseases. The Catholic saint St. George is well known for healing such disorders. Streams of devotees arrive to attend the annual Edathua festival, which takes place between April 27th and May 7th. The golden statue of St. George is placed on a dais for public viewing. The statue is also taken out on precession during the 11 days of the feast. 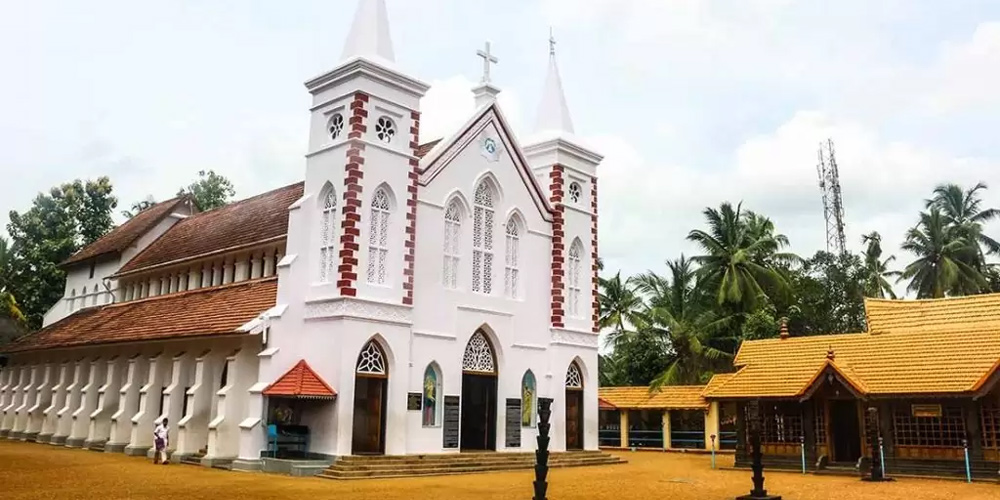 Founded by St Thomas in 54 CE, St Mary’s Orthodox Church at Niranam in Pathanamthitta district houses some remains of the apostle. Devotees arrive here in droves, for their belief in the apostle’s miraculous powers is still very strong. The church is also known for its architectural beauty; of interest here is the massive granite cross, the remains of the old church, a golden cross, and preserves ancient inscriptions on palm leaves.

Basilica of Our Lady of Ransom, Vallarpadam-Ernakulam 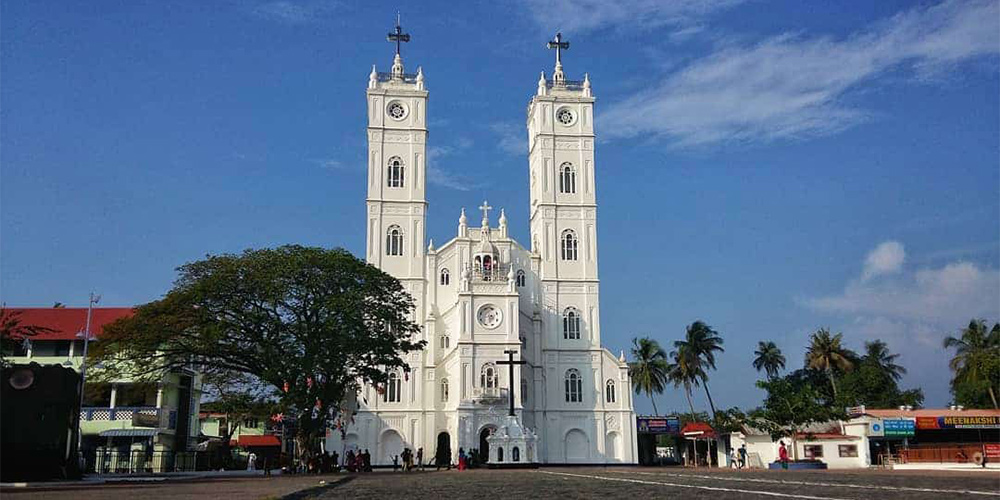 This famous church lies close to Bolgatty Island. Dating to the 16th century, the basilica stands on the picturesque Vallarpadam Island which is easily accessed from Ernakulam. The focal point here is the beautiful wooden painting of the Divine Mother holding the Christ Child. During a flood in the backwaters in 1676, this painting was all that was left of the small church it was originally enshrined in. The Diwan of the Raja of Cochin, Paliyath Raman Valiyachan, rescued the painting and enshrined it at this new location, which is the Our Lady of Ransom Church. The image of Mother Mary is known as ‘Vallarpadathamma’ inspired by the island where it is enshrined. This church has long been linked to miracles since the time a traveling noblewoman, Meenakshiamma, and her child of the Nair community, were saved from drowning by fishermen. She became a devotee of Mother Mary for the rest of her life. 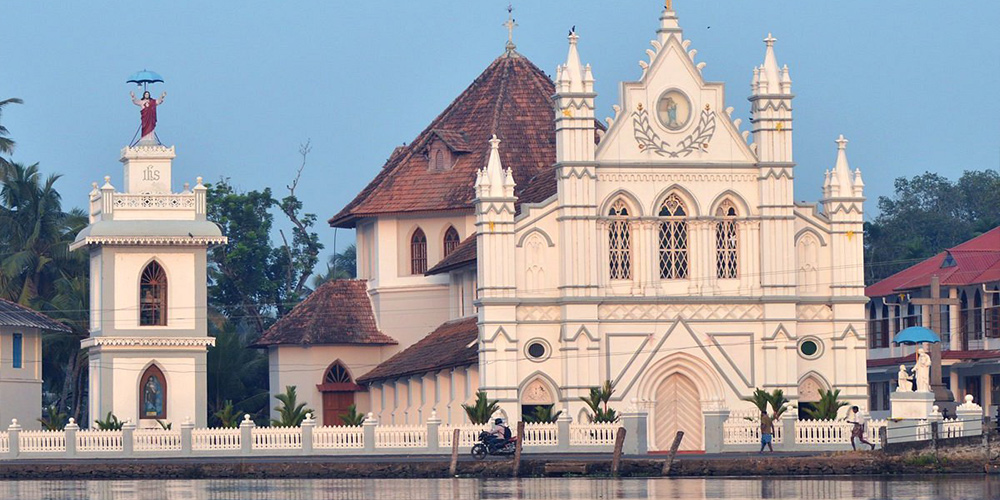 Dating to the 16th Century church, which was originally set up as a small chapel in 1583 CE, is located in Alappuzha district and has a vast following for its miraculous statue of the Passion of Christ. This is one of the oldest Syrian Catholic churches in India. Stories are still passed on of how during the famine of 1936 a programme of collecting Pidiyari (a fistful of rice) was used as an offering by the devotees. The cooked rice, which was then distributed amongst the devotees, was believed to have the power to cure several diseases. The church is associated with other practices, such as bringing lighted lamps on Thursday nights to the church premises and offering of prayers, which are said to also create miracles for these devotees. The altar inside is a beautiful piece of work.