By distinct destinationsNovember 7, 2022No Comments

Nestled between Himalayan reaches of India and China the tiny Hindu kingdom of Nepal is a magnet for its spiritual richness, its cultural splendour and its astonishing diversity as an extreme adventure sports destination for the global traveling community.

Formed in 1768 as a Hindu kingdom with the unification of a slew of small principalities and kingdoms scattered across Nepal, it was also known as the Gorkha Empire. The Shahs along with other leading aristocratic clans trace their ancestral roots to the Hindu Rajputs and Brahmins of Northern India who entered modern Nepal from the West in the wake of Muslim invasions. With the unification the Gorkha raja, Prithvi Narayan Shah, who claimed his lineage of be that of a Khas Thakuri Rajput, established monarchical rule. He called it ‘Asli Hindustan’ (real Hindustan), as opposed to India, which was controlled by the Islamic Mughals. As the only Hindu kingdom in the world, Nepal flourished as a monarchy for 240 years until 2008. The Shah dynasty reigned supreme during this journey. 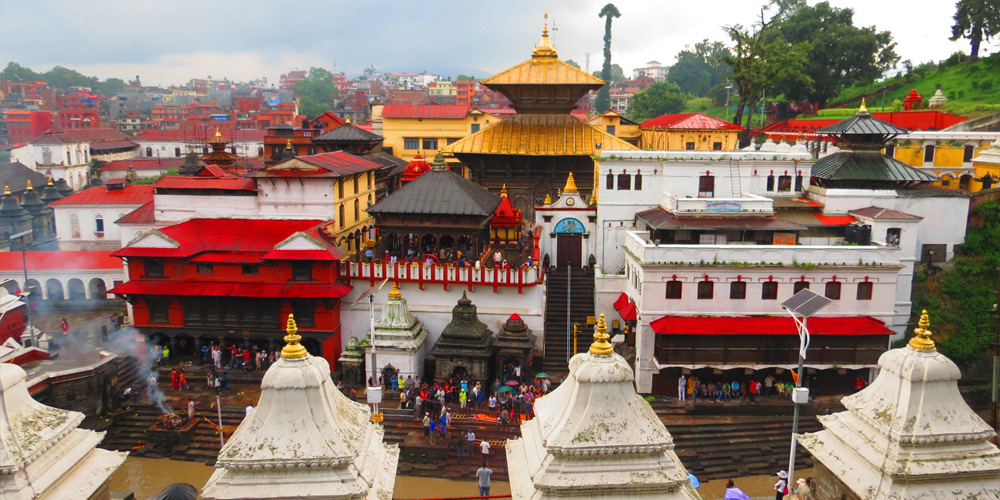 The Hindu god Lord Shiva is the guardian deity of the over 80% Hindus in Nepal. Originally built in the 5th century Kathmandu’s beautiful Pashupatinath Temple is dedicated to Shiva, one of the supreme divine beings of the principle triumvirate of the Hindu pantheon; the others being Lord Brahma and Lord Vishnu. Enshrined in the sanctum is a linga, a phallic symbol which universally represents the Lord Shiva. The temple, which lies along the banks of the Bagmati River, is the oldest Hindu temple in the country. The sacred ghats of the Bagmati witness the funeral pyres of Nepal’s Hindu community and their ashes scattered in the holy waters. Tradition has it that if one dies in the temple, one will be reborn as a human in the next life. This timeless setting re-enacts ancient rites and rituals such as antyesti the last ceremony preparing the dead for cremation. With ash smeared, matted hair sadhus, pilgrims and priests very much part of the ghats and temple complex, these vignettes continue to fascinate foreign visitors. This UNESCO-acclaimed World Heritage Site is also held in reverence by Buddhists. A kilometre east of it lies an important Hindu Shaktipeeth shrine known as the Guhyeshwari Temple; it, is edicated to the Goddess Parvati, who embodies Shakti or female power. 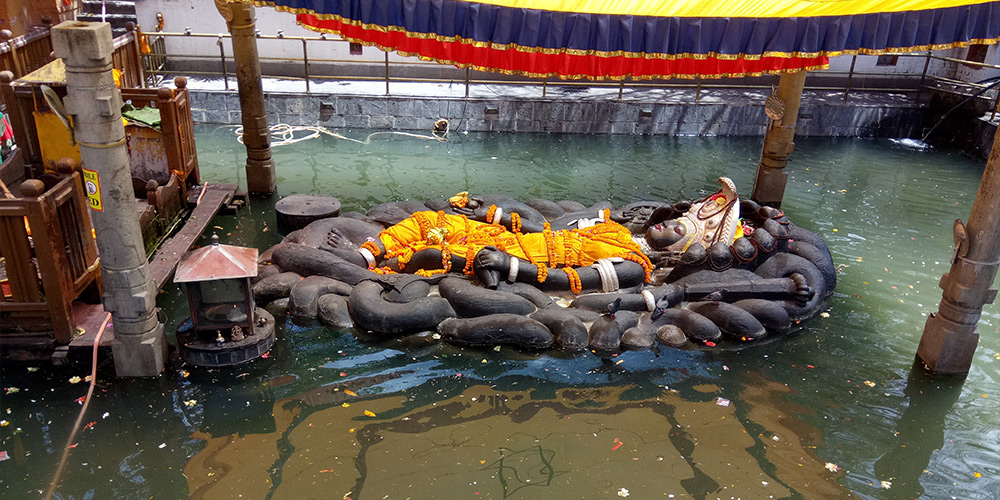 A short distance from downtown Kathmandu, at the foot of the Shivapuri Hill stands the Budhanilkantha Temple, where devotees spend prayerful moments in the worship of Lord Vishnu. Surrounded by serene waters a horizontal five meter-long basalt statue of the lord, who is by tradition, reclines on a snake, the eleven-headed Sheshanag. The complex is encircled by a line-up of the sacred rudraksha trees. Another temple, dedicated to Lord Vishnu, is the Changu Narian temple, located at Bhaktapur. 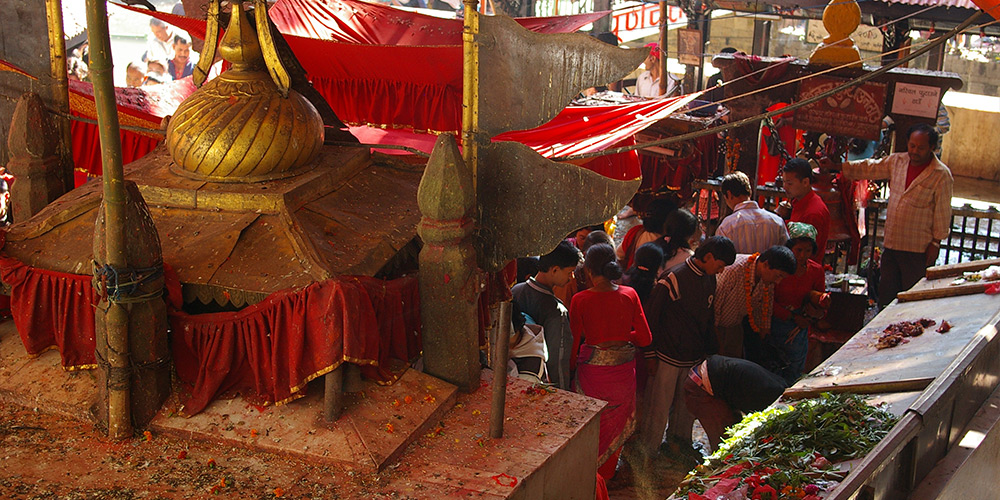 About 22km from Kathmandu lies the Dakshinkali Temple, dedicated to the goddess Kali, the fearsome avatar of Durga. Animal sacrifices are part of the rituals in this popular temple. They are held on Tuesdays and Saturday and can be quite gory.

In the ancient city of Patan, long renowned for its syncretic Hindu and Buddhist cultural links, stands the serene Kumbheshwar Temple. Raised to Lord Shiva it’s a pagoda-style 5-tiered structure. Streams of devotees arrive daily in the hallowed precincts of the Jagat Naraian Temple. This lofty Shikhara-style shrine is dedicated to Lord Vishnu. Having paid their respects at the olden times Chandeshwari Temple visitors wend their way to the placid pond behind the shrine, spending meditative moments feeding the ducks. 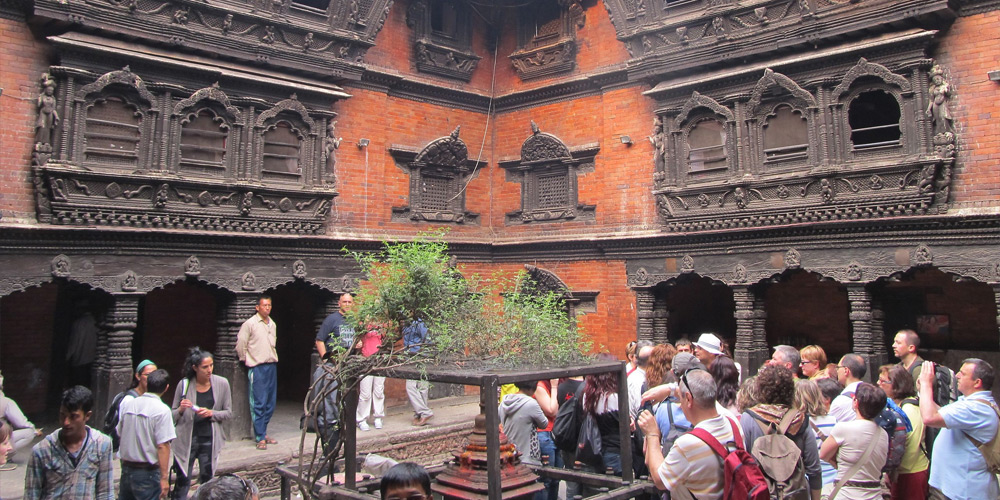 One of the unique forms of Hindu worship in Nepal is that of the goddess known as Kumari. The prepubescent goddess, an embodiment of the goddess Taleju (another avatar of Durga), is the tutelary deity of Nepal’s Malla and Shah Dynasties. At the Durbar Squares in Kathmandu, Patan and Bhaktapur visitors join throngs of devotees to glimpse this living goddess for her blessings from a window in the Kumari Ghar, where she lives in strict seclusion all year round. It is only during the annual Indra Jatra, when she is taken in a very public colourful procession through town, that devotees can see their beloved goddess and pay obeisance to her.

As you travel around Nepal, you will come upon many major and minor shrines which reflect how deeply Hindu culture has been embedded in the country over the centuries.

In the 12th century the Malla Dynasty dominated the Kathmandu Valley area and for the next 600 years these Hindu Brahmins oversaw a golden period of art and architecture, which produced some of the most impressive Hindu Temples that still stand today. 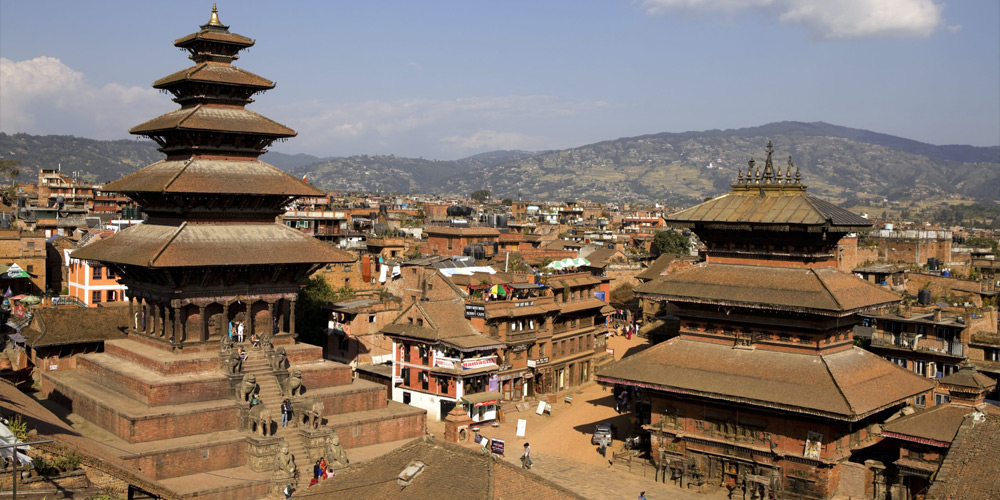 The 17th century Royal Palace in Patan, the five-story pagoda Temple of Nyatapola in Bhaktapur Square and the Old Royal Palace in Kathmandu are just some of the many marvels of Hindu architecture produced in the the Malla Dynasty that are dedicated to Hindu gods and adorned with intricate reliefs and statues.