The esoteric, the mythical,, the mystical–all have played a hand in shaping the theatrics of Bhutan’s festivals, or tshechus in local parlance. If there’s anything that gives you an insight into the history and cultural splendor of the little Himalayan kingdom, it’s the array of year round festivities on the religious and social calendar. Festivals are an inextricable and most enchanting component of the narratives of celebrating the divine, which provides the energy, the color and the magical quality to these ceremonial performances played out in vibrant costumes, fantastic masks and elaborates ritualistic dances. The festivals also provide the visitor an opportunity to mingle with the locals who step out in all their finery. The men dress in the gho and the women in the kira, topped off by colorful jewelry and headgear. The communities see the festivities as a path to ritualistic cleansing and attaining merit, and the blessings of the gods for their good karma. The overpowering of evil by good is a common silken thread that binds all the pomp and pageantry of these festivities together. By and large, most of the dances have their roots even further than medieval times. And are a rare occasion to be enjoyed as they may be performed just once or twice in a Gazing upon religious paintings (thangkas) in a ceremonial unveiling at the event are considered liberating one’s soul from the samsaric cycle of birth and rebirth, aspired to by Buddhists.

Get ready for an enlightening cultural extravaganza, where masked dances take centre stage, rare silk religious paintings (thankgas) are put on display to be venerated by the public and the profusion of worshipful ceremonies revolving around the deeds of Guru Padmasmabhava, the founder of Mahayana Buddhism, send the crowd into spiritual raptures. Thimpu, Paro and Bhumthang, the most accessible tourist gateways are the best places to get your fill of these wondrous celebrations. 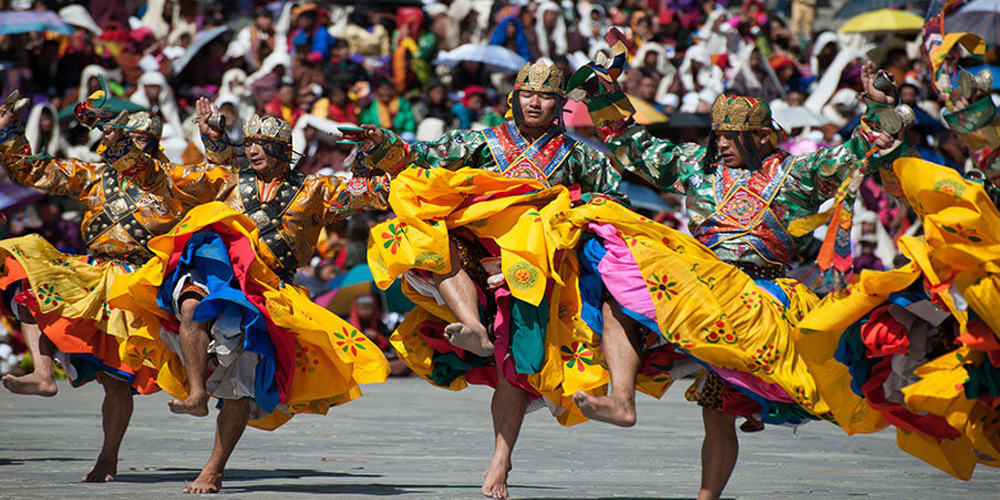 Considered the national festival, its construct is on a massive scale. The run-up to the 3-day of the festival, held at the large Tendrel Thang grounds , is filled with invocations of the gods by prayer and ancient rituals in homes and public spaces. Crowds throng the venue on the day of the festivities marked by fantastical mask dances that are layered with symbolic moves and gestures. The festival was launched by Gyalsey Tenzin Rabgye in 1670 to commemorate the birth of Guru Rinpoche. Look forward to performances such as Guru Tshengye (the eight manifestations of Guru Rinpoche), Shawa Shachi (Dance of the Stags), Dance of the Terrifying Deities and Dance of the Lords of the Cremation Grounds. They hold the festival in October. 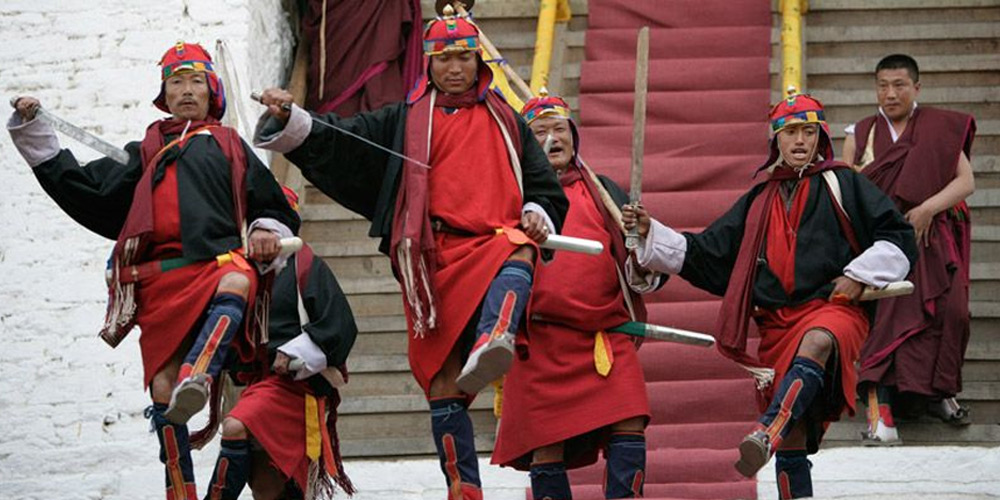 The Punkaha Drubchen held in Feb/March is colored in different shades as it provides a window to a historic event by dramatizing an episode from a 17th century battle between the Bhutanese and the Tibetan forces. Watch how the local militia appareled in battle accouterments go through the paces of this historic event when the villagers of Thimpu rallied together to drive back the Tibetan army. Legend says that the Buddhist saint, Zhabdrung Ngawang Namgyal, led the country to victory. Stay back for the Punakha Tshechu, which follows close on the heels of the Punakha Drubchen. Held at the courtyard of the Punakha Dzong monastery, they started it in 2005, intending to preserve Buddhist teachings. They hold the festival in March. 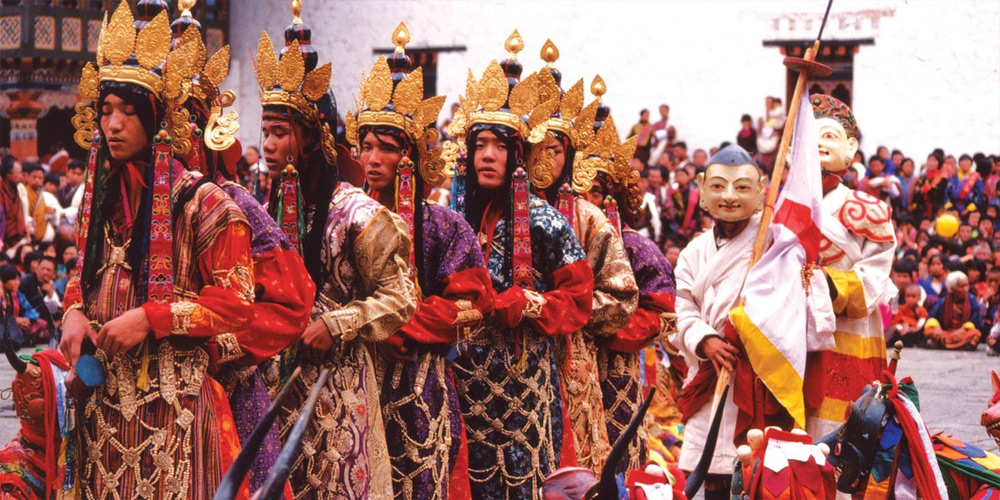 This celebrates the foundation of Jambay Lhakhang Temple near the Bumthang Chhu River in Bumthang Valley.It is one of the 108 temples that was built in a day by the 7th century Tibetan King Songsten Gampo. Legend has it that this impossible feat was enacted in order to defeat a demoness who lay sprawled across the Himalayas. They constructed the temples to crush her for all time to safeguard the region from her evil. This temple is believed to have pinned down her left knee. One of Bhutan’s unique celebrations, Jambay Lhakhang Drup Festival is rich in esoteric nuances and attracts thousands of visitors. The spotlight falls on the fire ceremony known as Mewang in which we can find locals dancing under a flaming structure created with dry grass. Late in the night, one gets to witness the Dance of Treasure (Tercham) where masked dancers and monks dance stark naked to bless infertile women so they may bear children. One legend has it that back in the 8th century, at the stroke of midnight, a group of local men performed this dance to put a spell on the devils that were causing mayhem in the area.The festival is held in the month of November. 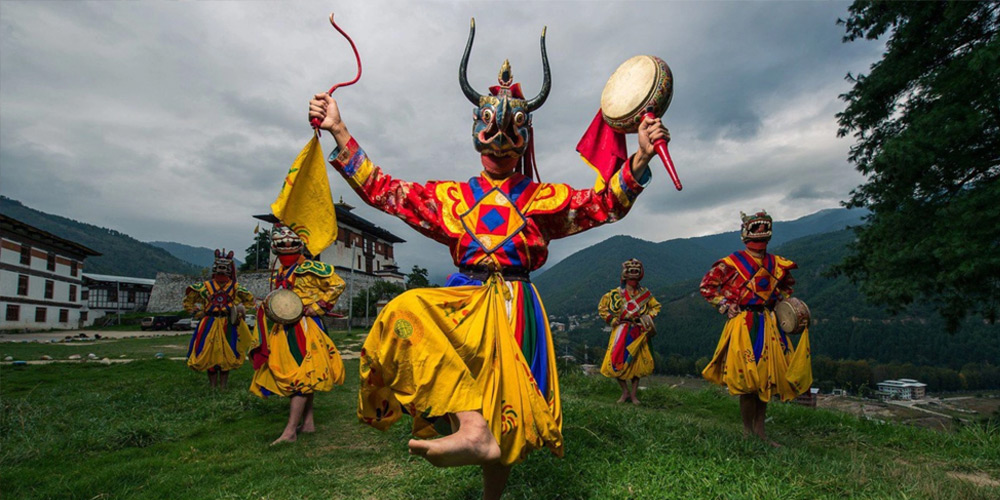 The festival was first held when the Dzong in the region of Wangdue Phodrang was finally completed in 1639. A unique aspect of the festivities is the ornamental speeches and songs known as Lozeys. Unforgettable is the enactment of the ‘Dance of Ox’, where everyone dances to ensure a peaceful afterlife. The highlight at the end of the festivities is a spiritual cleansing spectacle involving the unrolling of the Guru Tshengye Thongdrol, a massive scroll painting, held in deep veneration by devout Buddhists. They hold the festival in September/October. 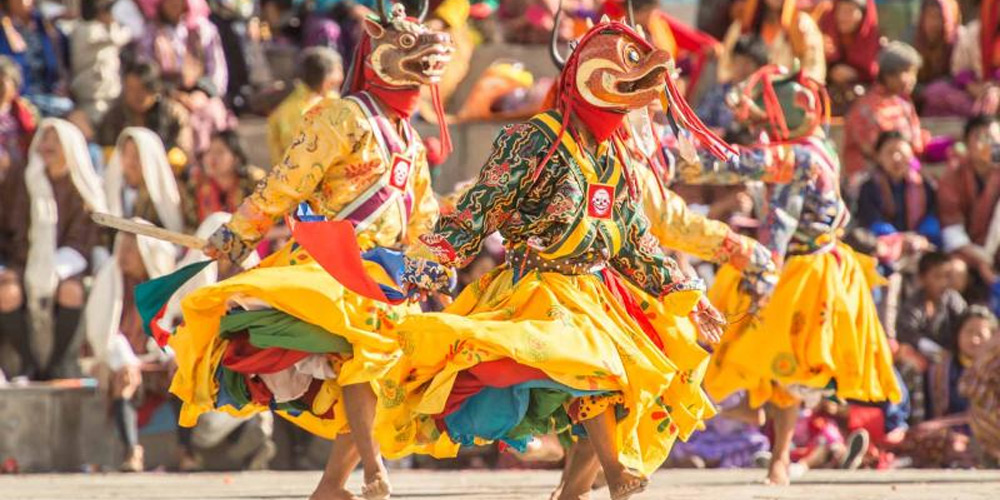 The colors of spring are further enhanced with the celebratory nuances of the Paro Tshechu where you will find monks and laymen richly costumed in multi-hued brocade dress code. Guru Tshengye, the masked dance performances, pull out vignettes from legend about the eight manifestations of Guru Padmasambhava, much to the delight of the growing crowds. The air of merriment is catching. But as with many of Bhutan’s festivals, there is always an underlying thread of worshipfulness. The spotlight falls on the much awaited unveiling of the 350 years old Thangkha depicting narratives from history, and the episodes related to Guru Rimpoche. The devout believe that gazing upon this sacred artwork will cleanse them spiritually. Held over 3-4 days in Paro Dzongkhag district, the festival, dating back to 1644 when the dzong was completed, is hosted in the months of March or April. 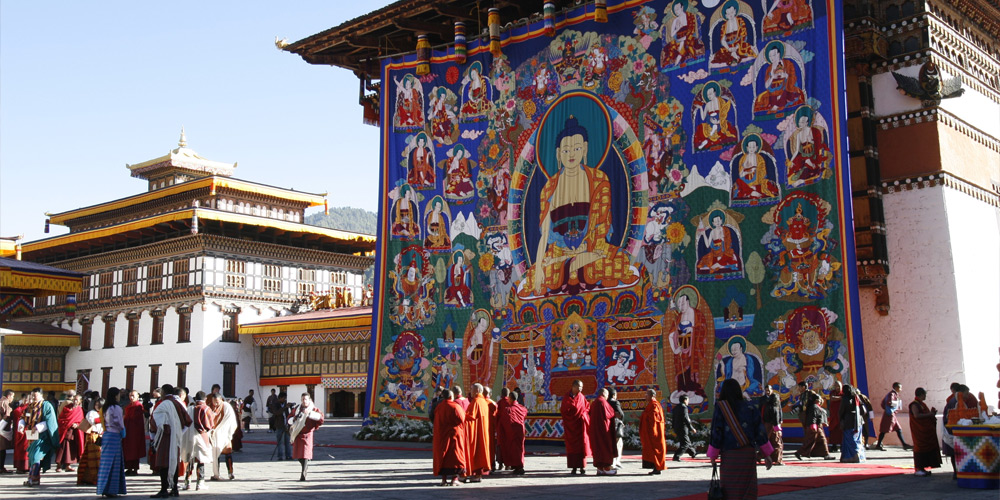 Bhumthang district is of particular significance in Bhutan’s spiritual heritage from here that Guru Padmasaabhava spread Mahayana Buddhism across the country .This unique 1-day festival held at Tharpaling Monastery in March differs from the other festivals you would have attended during your sojourn in the country. Don’t expect to find the popular mask dances on this occasion. Instead, the spotlight falls on the massive throngdrel (silk thangka) of Jowo Jampa and Kunkhyen Longchen Rabjam, which is unveiled for public veneration. The entire ceremony, held every alternate year, is preceded by prayers (Monlam Chenmo) conducted by the monks. The monastery stands aloft on a hillock overlooking of Chumey and Gaytsa, two small villages in the Bhumthang Valley. In the 14th century a Buddhist thinker is said to have arrived at this spot to teach Dharma, the doctrine which came to be locally known as Yodsel Dorji Nyingpo.His teachings gathered several followers and the site (Tharpaling, or the place of liberation) became a place of veneration. 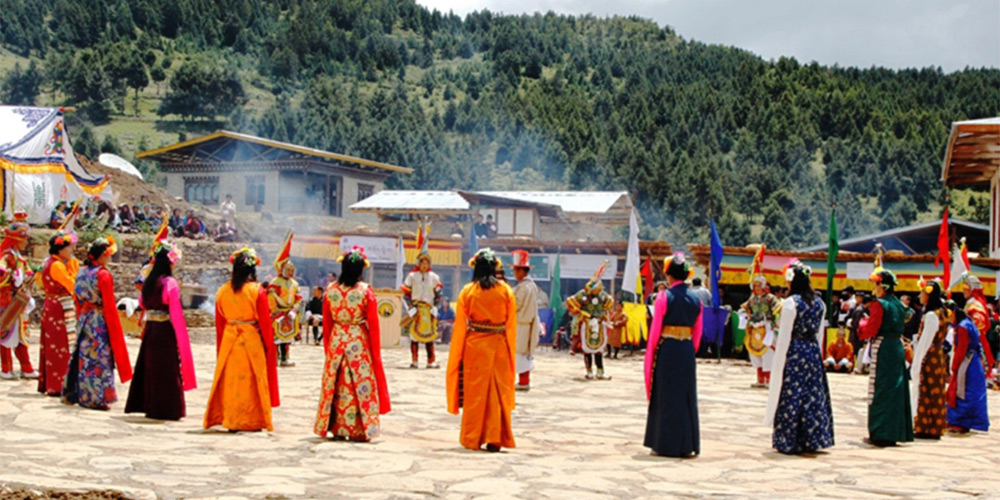 Mushrooms are an integral part of Bhutanese culinary traditions, so much so that there’s a dedicated festival to the naturally growing Matsutake mushroom, which appears seasonally in forest groves. Locals in Ura Valley during the mushroom season (August) camp out for days in the forests to gather these precious gifts of nature. The festival is a fabulous opportunity to enjoy a truly immersive experience with the locals in their homes and out in the forests where one can join in on the mushroom picking. 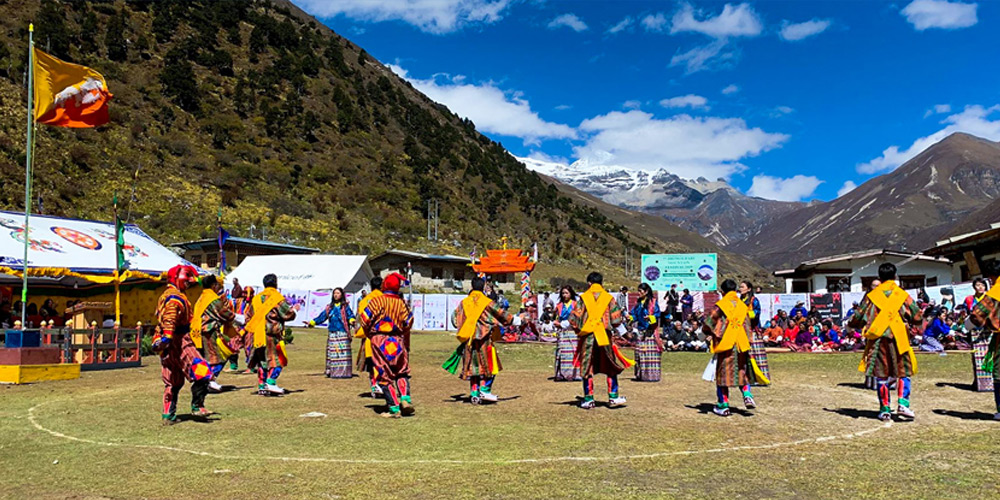 Mt Jomohari, known as the “Bride of Khangchenzonga” is held in deep veneration by the Bhutanese. The mountain, which also goes by the name of Chomolhari stands on the borders between Tibet’s Yadong County, China and Bhutan’s Paro district.The two-day festivities, held in October, spill out with great energy in the foothills of the revered mountain. The highlight of the festivities is the ‘Snow Leopard Show’ aimed at creating awareness for the conservation of snow leopards in the region, which are declining in numbers. You will get to see the locals dressed in traditional finery madly enjoying the fiesta of folk dance and music. 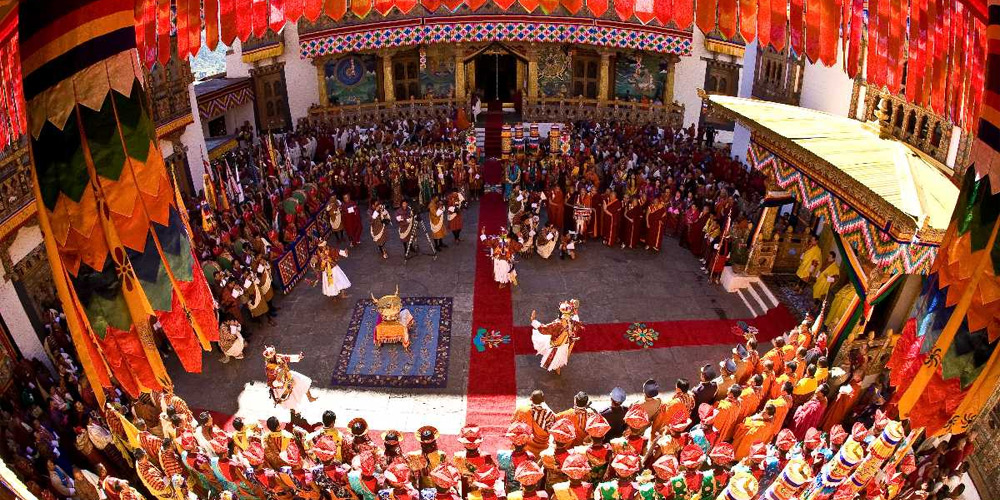 This is one festival which offers a delightful window to the nomad communities of Bhutan. The venue is the gorgeous Bhumtang valley where the nomads gather in great numbers in an extravaganza of cultural delights. Immerse yourself in this showcase of the dazzling variety of traditions, and lifestyle of a people always on the move. You will love the ceremonial royal procession of Chipdrel and the opportunity to sample their cuisine, shop for souvenirs, and have a good time.

While the three gateway cities of Thimpu, Paro and Punakha have a fair share of festivals to explore, moving around the country, you will discover there are other local festivals that are vibrant with traditions and reverential fervor that grab your attention. Stop by to enjoy these hidden cultural gems.