Plunge into the spirited celebrations of a round of annual festivals in Nepal and discover a medley of intriguing traditions and customs that are unique to the country. Religion, societal mores and agrarian pursuits are some of the great influencers of these festivities. 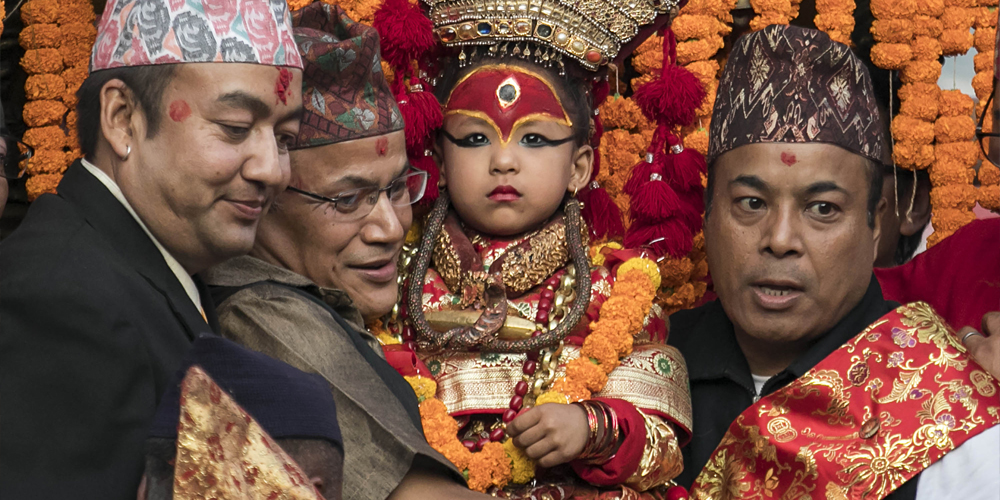 An extraordinary religious tradition related to the Hindu faith in Nepal revolves around Kumari, the Living Goddess. The secretive ways of Kumari worship is a rich and unique saga that began in the 17th century. Traditionally the Kumari is a Newari pre-pubescent girl revered as an incarnation of the Goddess Taleju, tutelary deity of the Malla and Shah rulers of Nepal. At the Durbar Squares in Kathmandu Bhaktapur and Patan, devotees linger for long for even a glimpse of the goddess at the window of the Kumari Temple as it is considered highly auspicious. The only occasion when the Living Goddess makes a public appearance is during the annual Indra Jatra festival in September, when she is greeted by great throngs of devotees seeking her blessings near Hanuman Dhoka Palace. This is one of the worshipful festivals of the Newar community of the Kathmandu Valley. The most extravagant procession takes part in Kathmandu when the ornately dressed goddess is riding through the streets in a gilded chariot.

Lakhay or masked dancers make their way down the streets on most evenings attended by the vigorous beat of the drums. Through the days of the festivities, people gather around Darbar Square where to witness religious performances. People arrive in droves to witness the pole raising ceremony, again symbolic of the Shivalinga at Basantapur Square in front of the old Hanuman Dhoka Palace. A massive image of Bhairab (a manifestation of Shiva) is on display opposite his temple at Indra Chowk. 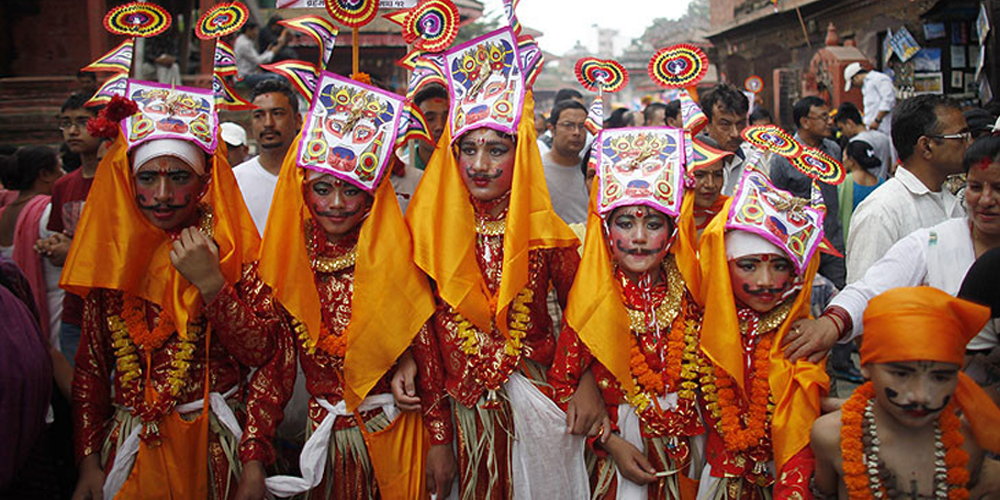 Quite an exceptional experience unfolds during the annual Gai Jatra or the festival of the cow. Held in July/August, this unique tradition is about honouring the cow in the memory of deceased loved ones and to comfort themselves from the pain of that loss and that they are now in a place safe from harm. In the course of the mirthful festivities, you will find children dressed as cows on a fun-filled parade in some streets of Kathmandu. In Bhaktapur, the festivities stretch over a week. The festival is said to have been inspired by a Malla Queen who went into deep mourning for her son who met an untimely death. In order to console her, the king asked families who had lost loved ones to join in a procession to show that she was not alone in her sorrow. The festivities were a joyful one to counter the sorrow they had been steeped in. 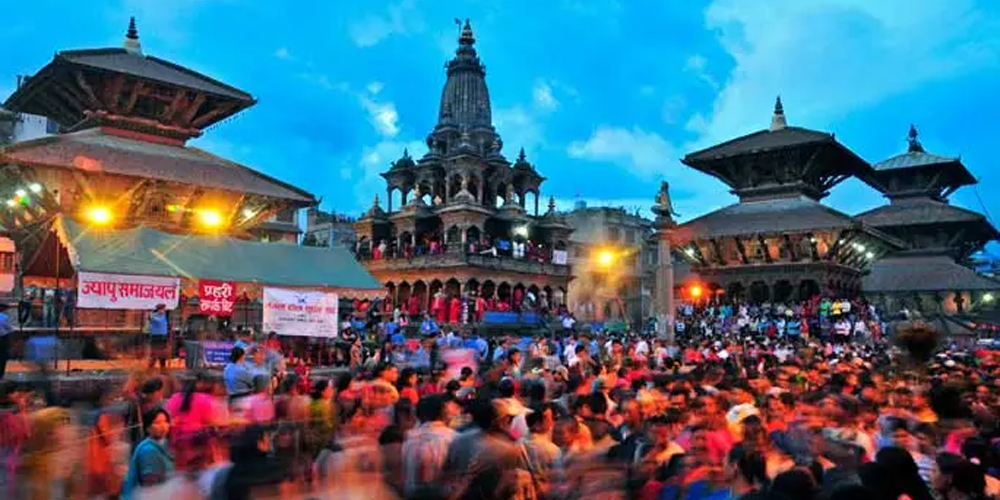 This colorful festival propitiates the beloved god of love Krishna, who is also a manifestation of Lord Vishnu, on his birthday. Throngs of prayerful devotees arrive to worship in temples dedicated to the god who was born at midnight on Ashtami, the eighth day of the dark moon of August. The crowds are dense at midnight at the Krishna Mandir in the Durbar Square at Patan. Throughout the day there is much hustle and bustle in the square with the goings and comings of stream of pilgrims and visitors. The night scene is atmospheric at the 17th century shrine as the air is filled with devotional songs and chants from the scriptures as devotees arrive bearing traditional offerings to the deity in all humility. The gentle glow of oil lamps adds a magical touch to the scene. Scenes from the streets are touched by this joyful occasion as images of the dirty are led in procession, followed by musicians and devotees. A walk around the old quarter of Kathmandu takes you past places where episodes from the Lord’s life are on display. 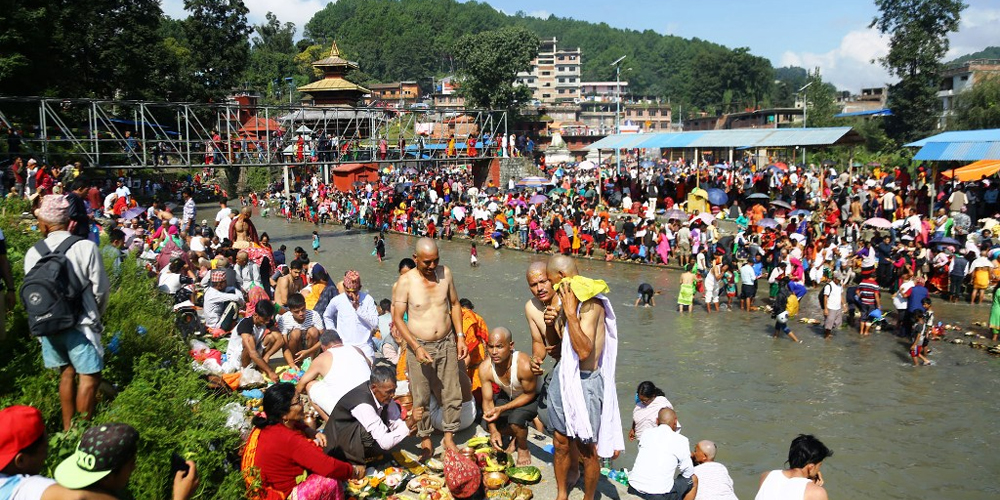 Revered as Kushe Aunsi, this festival, held in September, is a celebration of fathers. As you go around town on the occasion of Gokarna Aunsi, you will find streams of sons and married daughters dressed in their finery and bearing gifts, visiting family homes home to show their love and respect for their fathers. The occasion is marked by sharing of a home cooked meal with special meat dishes, fragrant rice and breads and plenty of sweetmeats. Temples dedicated to Lord Shiva also witness worshipful scenes on the occasion during the festivities. The temple at Gokarna also attracts people who come to perform the ritual ‘ shradh’ or prayers for fathers who have passed away. Do note the festival, though it is dedicated to fathers, does not coincide with the Western festivities of Father’s Day. 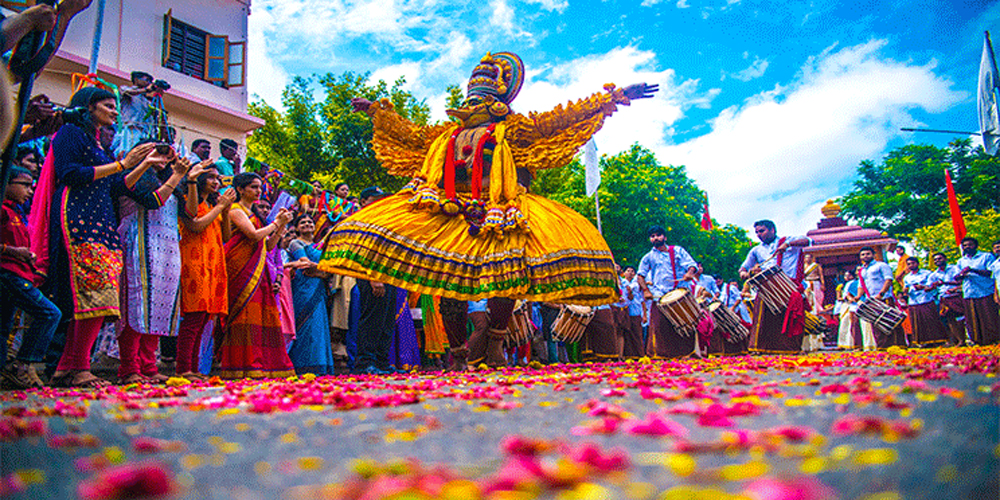 The celebrations of this much awaited annual festival stretch over two weeks of prayer and veneration dedicated to the Hindu goddess Durga, the Mother Goddess who represents Shakti or the energy of all the gods. Coinciding with the harvest season, the festivities take on fresh verve and energy as people gather in worship and general bonhomie in each other home in joyful reunions. Temple visits and ritual dips for purification in the waters of the holy rivers are de rigeur in the days of the festivities. Flying kites is a very important part of the festivities. The high points of the celebrations are the worshipful days of Ghatasthapana, Phool Pati, Mahaastami, Nawami and Vijaya Dashami. Everyone looks to dress in their best finery and enjoy each event with great enthusiasm. While traveling through the Kathmandu Valley at this time, you will have occasion to witness the traditional sword processions (Paayaa) are also held in various parts of the Kathmandu Valley. Massive crowds converge at the Taleju Temple (closed to the public otherwise) on the 9th day. The festivities wrap up on Kojagrat Purnima, the night of the full moon, which is the 10th day, known as Tika when you’ll see everyone dressed in new clothes and a vermilion dot adorning the forehead to mark the festive day. 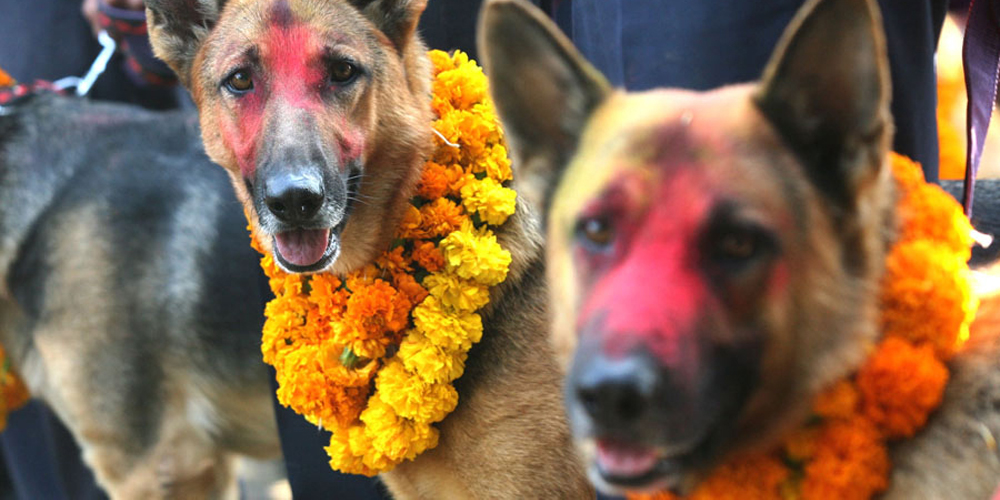 The festivities held to honor Lord Yama, the god of Death carry on for five days in November. But holding a predominant place in the festival of lights and colors is the Goddess of Wealth, Lakshmi. On the first day, known as Kaag, Tihar is all about the worship of the crow, who is the informant of Yama. On the second day, Kukur Tihar, people worship dogs, as they are the agents of Yama. Gai Tihar and Lakshmi are celebrated on the third day. This involves honoring the cow with food and worship in the morning and holding an elaborate prayer ceremony for Goddess Lakshmi in the evening. The Newari community, perform the Mhu Puja on the fourth day which is dedicated to draught animals, oxen. Day five is dedicated to brothers, when sisters adorn the foreheads of their male siblings with the auspicious vermilion dot. 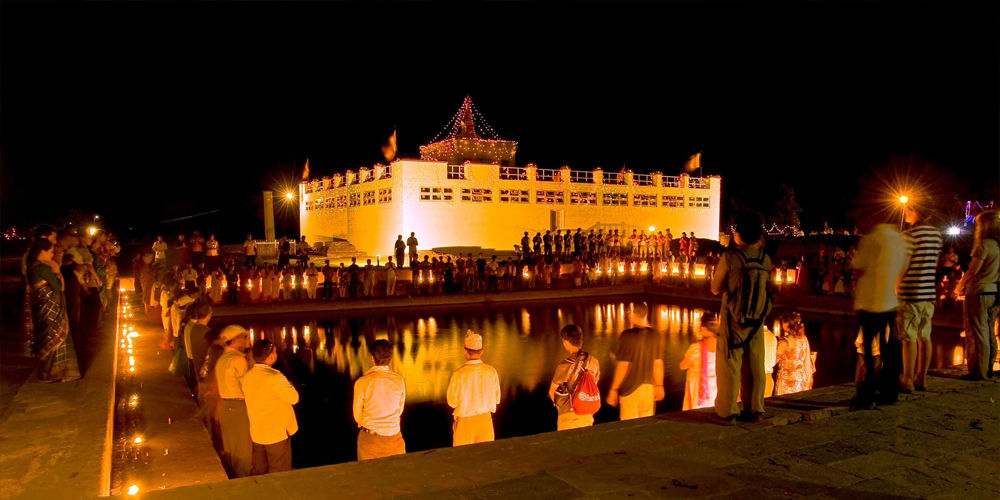 Born as a prince of the Shakya dynasty in Lumbini, in the Kapilvastu district of Nepal, Lord Buddha is now worshiped with an extravagant display of pomp and pageantry on his birthday, which took place in 623 BCE. The grand festivities, attended by throngs of monks and devotees, are aligned with a full moon night in May/June.

The festivals of Nepal offer a unique opportunity to explore some unique aspects which are significant to its cultural richness. We recommend that when you are traveling near any such celebrations; you will come away richer for the experience.