The allurements of Sri Lanka, an enchanting melting pot of cultures, traditions and diversity of ethnic communities, are beautifully showcased by the line-up of festivities that take precedence on its religious and social calendar, To get the full measure of this rich heritage of history and culture try to time a holiday on this glittering spice island, a marvel for its verdant splendor, historic spots and inviting beaches. Many of the festivals are shaped by the deep-rooted influences of the four religions and community customs and the reason behind so much of the vibrancy, energy, and pageantry that are the hallmark of each individual event. 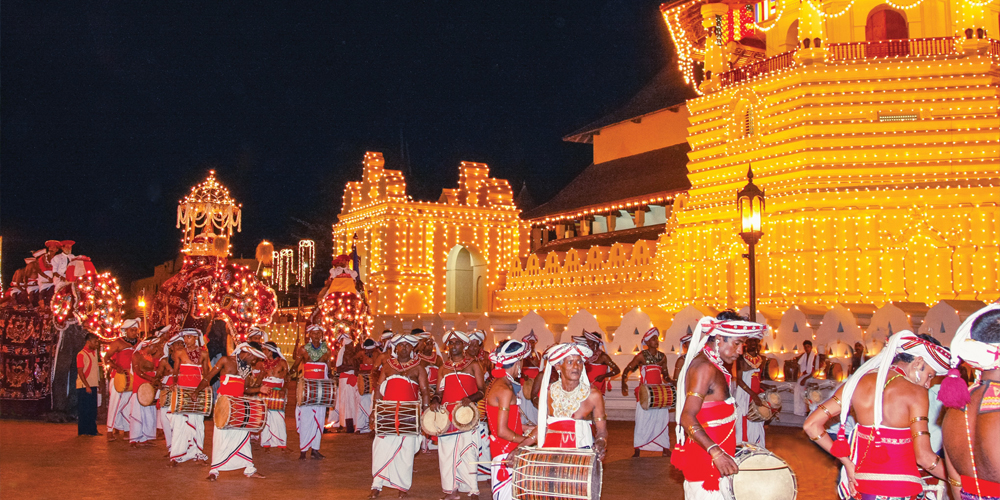 Buddhism has been a driving force in the country from its earliest times, when the religion was introduced in Sri Lanka, the Ceylon of yesteryears, in the times of Indian Emperor Ashoka, its greatest proponent. The grandeur and elaborate ceremonials of the Festival of the Sacred Tooth, a week-long affair, revolves around a tooth of the Buddha, a relic that has been enshrined in the temple of the same name at Kandy. Amongst the oldest festivals in the country, and something you should definitely not miss if you are in the vicinity in Esala (July/August), the Esala Perahra is a magnet for throngs of devotees and visitors from all over the world. Costumed in elaborate attire the main protagonists of the gorgeous processions and ceremonials are thousands of dancers, drummers, fire jugglers, musicians who keep the crowds enthralled. Unmissable too are the gorgeously accoutered elephants who make up the parade with other participants. 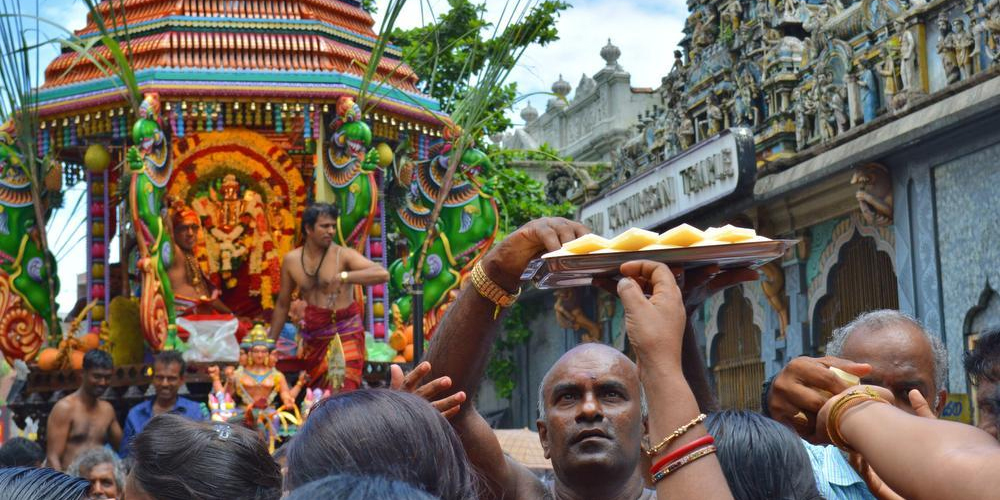 The Hindu community of Sri Lanka comes out in full fervor to celebrate the festival of Vel, one of Sri Lanka’s major Hindu festivals. A recurrent theme, the triumph of good over evil, is illustrated through deeds of the primary deity Skhanda, the God of War, and the worship of his trident or vel in local parlance. You can watch the proceedings of the Vel Festival in Colombo in July/August, in which the elaborate procession of the golden chariot carrying the Lords vel, slowly proceeds from Pettah to Bambalapitiya. The chariot is pulled by hundreds of white-robed devotees followed up by an array of musicians, dancers, acrobats and elephants who pass along through devotee-lined streets in the city. 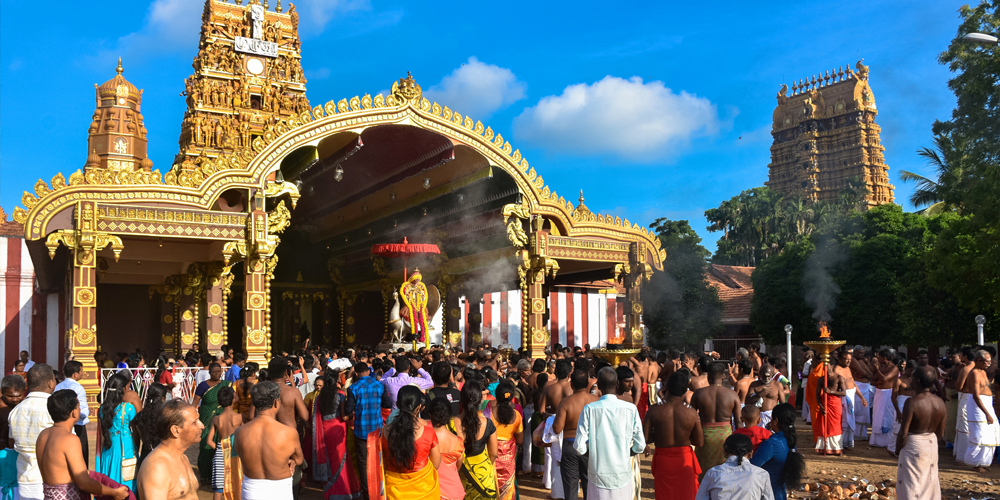 The tranquil environs of laid-back Jaffna become a theater of hectic activity and religious fervor during the annual festivities of the Nallur Festival, which spread over 25 days between the month of August and September. Thousands of devotees flock to the Kandaswamy Temple, which is the focal point of much of the action. The women come dressed in all their finery while the menfolk are attired in pristine white sarongs. The festivities are a riot of color and movement with the elaborate parades awash with colorful floats, and performers mesmerizing the crowds with their acts. On the 24th day of the festivities, they bring on the massive chariot dragged by hundreds of men in white sarongs to the great delight of the crowds. Next day, fervent devotees can be seen in various stages of self-mortification on their way to the temple accompanied by drummers. 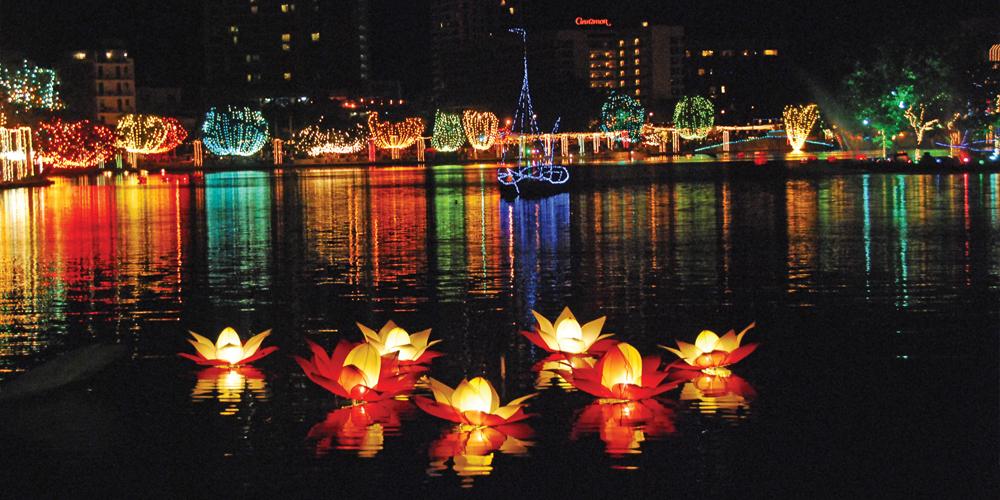 While this week-long Festival of Light, for the Buddhist community is held all over the island its grandeur is best observed in Colombo.The festivities are kicked off on the full moon of the lunar month of Vesak, or May on the Gregorian calendar, and commemorate the Buddha’s birth, attainment of enlightenment and his passage to nirvana. The festivities on this auspicious occasion are marked by prayer and fasting, almsgiving and community work; fairy lights and lanterns adorn the homes, temples and even the commercial establishments of the Buddhist community. 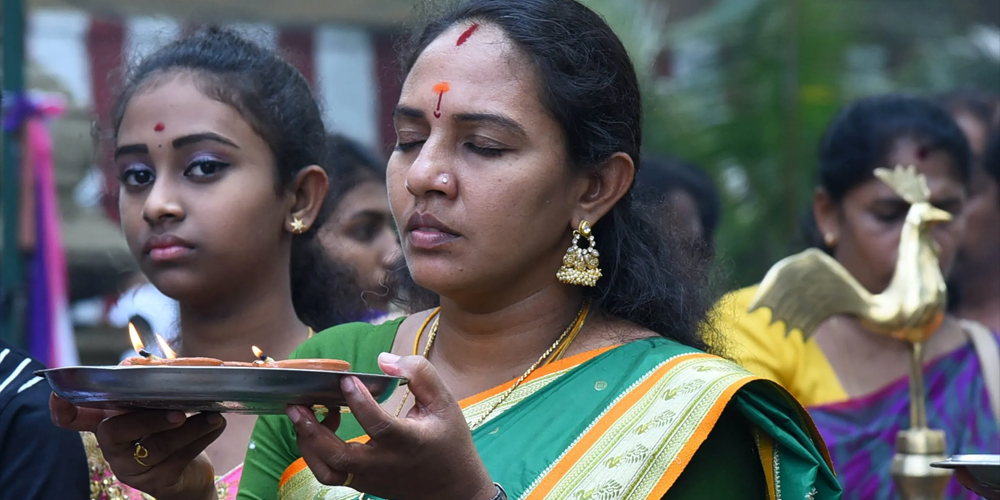 Held in celebration of the marriage of Shiva and his consort Parvati, Shivaratiri, held in Feb/March is an extravaganza of prayer, fasting and worshipping of the beloved Lord. Night long worshipful gatherings of the island’s Hindu community congregate at the Shiva temples all across the island where devotees lose themselves in their adoration of Shiva. Mornings begin with ritual purification baths, and the deity at the local temple in bathed in milk and honey and adorned with vermilion powder. Prayer and meditation are paramount through the day and night of Shiva’s nights. Music and dance performances are also arranged at some shrines. Colombo’s Sri Kailshwarar is where one may witness these. 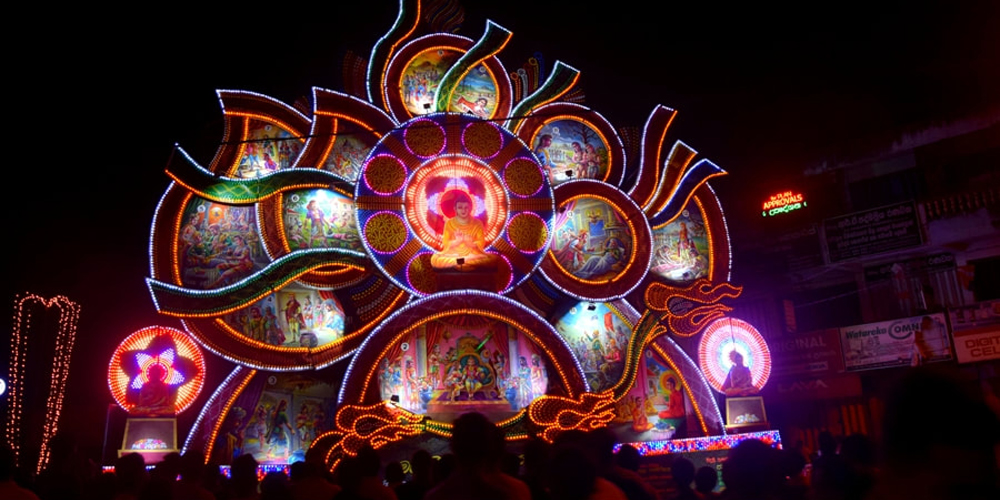 This annual Buddhist festival is dedicated to the arrival of Buddhism on the island in the 3rd century BCE. Held in June, the best places to witness the celebrations are the ancient city of Anuradhapura and historic Mihintale, the spot where the Buddhist doctrine was shared by the Buddhist monk Mahinda with King Devanampiyatissa. In Sri Lanka, Buddhism is of deep significance spiritually and historically, so watching the festivities unfold is a deeply enriching experience. Thousands of white-robed pilgrims ascend the mountain to pay their respects at the shrine. Join in the festive activities of the locals which involve lighting of lanterns, elaborate feasts and learnings from Buddhist literature. Visit the celebrated temples at nearby Anuradhapura lively with traditional festivities. 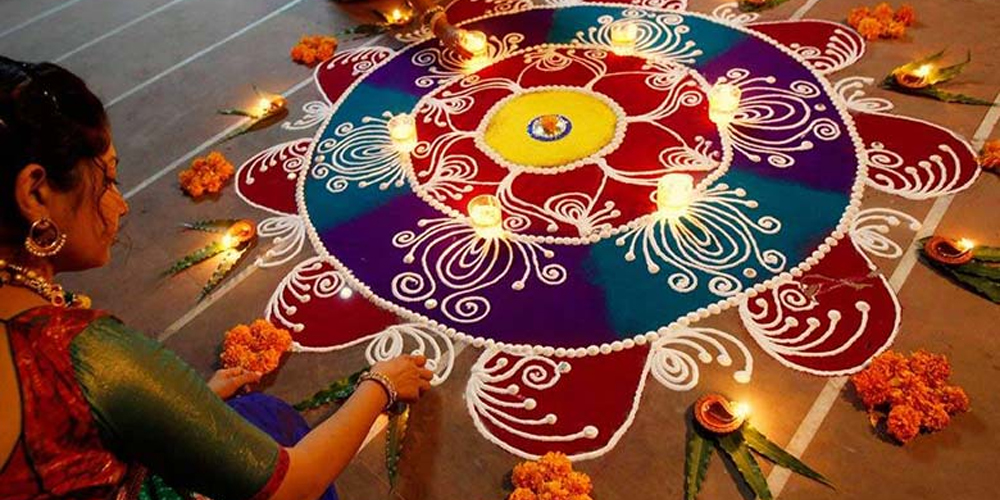 Dear to the heart of the island’s Tamil community is the Hindu festival of Deepavali or Festival of Lights, held in October/November. The triumph of Lord Rama over Lankan King Ravana is imbued with the rich symbolism of the fight between good and evil. Lakshmi the goddess of wealth, is propitiated in homes all over the island. Glittering oil lamps and fairy lights drive away the darkness of the moonless night everywhere. It’s a time adorn new clothes, for friends and families to gather, exchange gifts, feast on good food and visit temples. 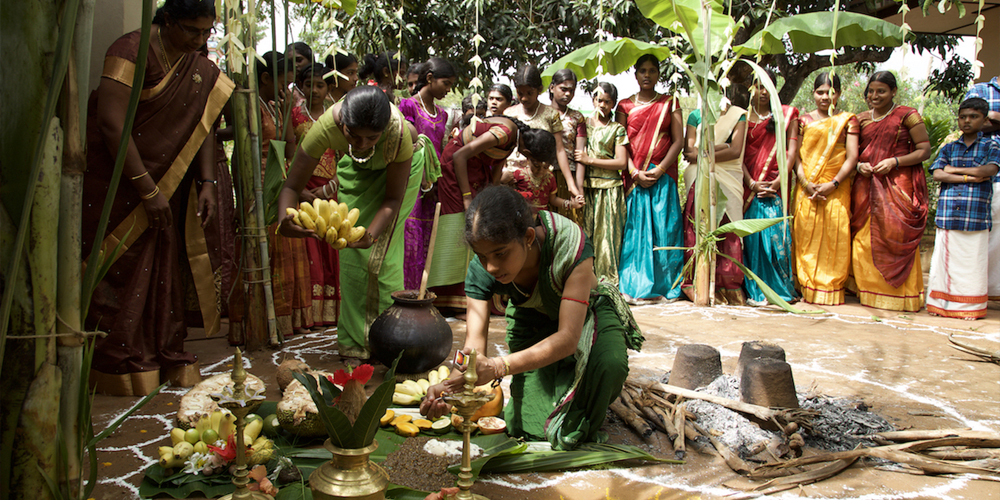 The Tamil community on the island has been celebrating Thai Pongal for over 1000 years now. The festivities are kicked off on the first day of Thai on the traditional Tamil calendar (mid-January) in line with the start of the sun’s six-month journey to the north. At the center of this harvest festival is the worship of the sun god ‘Surya’ as well as cattle–both intrinsic components to the agri-activities of the community and the promise of a good harvest. Traditionally, homes are adorned with banana leaves and colorful kolam patterns. A kind of pudding made with rice, milk and raisins is shared with the local community. The next day, the cattle are honored by the farmers and adorned with garlands. 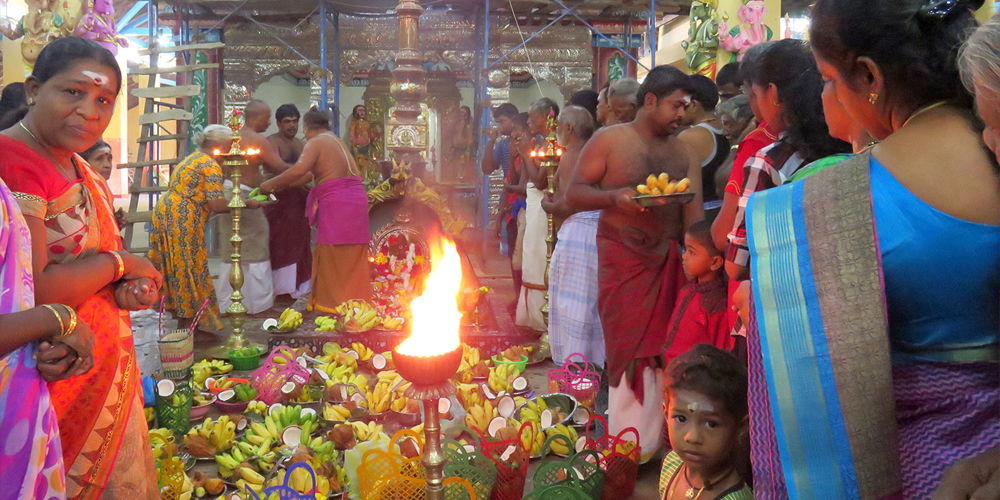 Celebrated in the Gregorian calendar month of April or the beginning of the lunar year, the Sinhala and Tamil New Year are a riot of color and festive cheer. Homes are given a thorough cleaning, new clothes are the order of the day and feasting on delicious traditional sweets and desserts with family and friends make up the day’s hectic schedule.

What’s also fun to explore are the more localized festivities as you wander across the island, because they mirror some beautiful lesser-known gems of the island’s grand cultural mosaic.