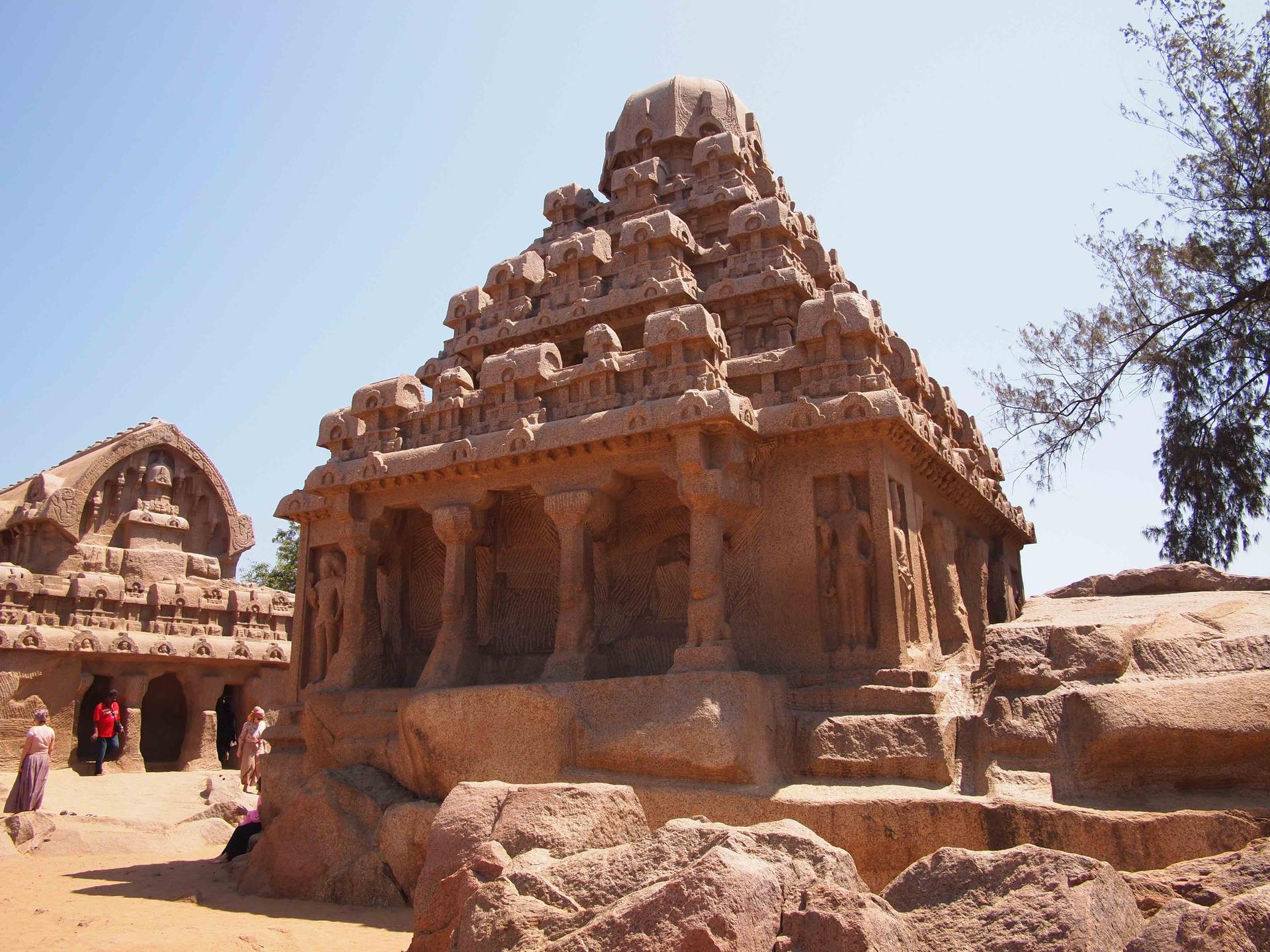 Mamallapuram, Mahabalipuram or Mahabs as the locals lovingly call it, is a quiet seaside town in the Southern Indian state of Tamil Nadu. A quintessential traveler’s enclave, it’s the perfect place to relax, enjoy fresh seafood and take in the ocean breeze. But it’s also one of India’s most important stone sculpting regions and home to a spectacular UNESCO World Heritage site. 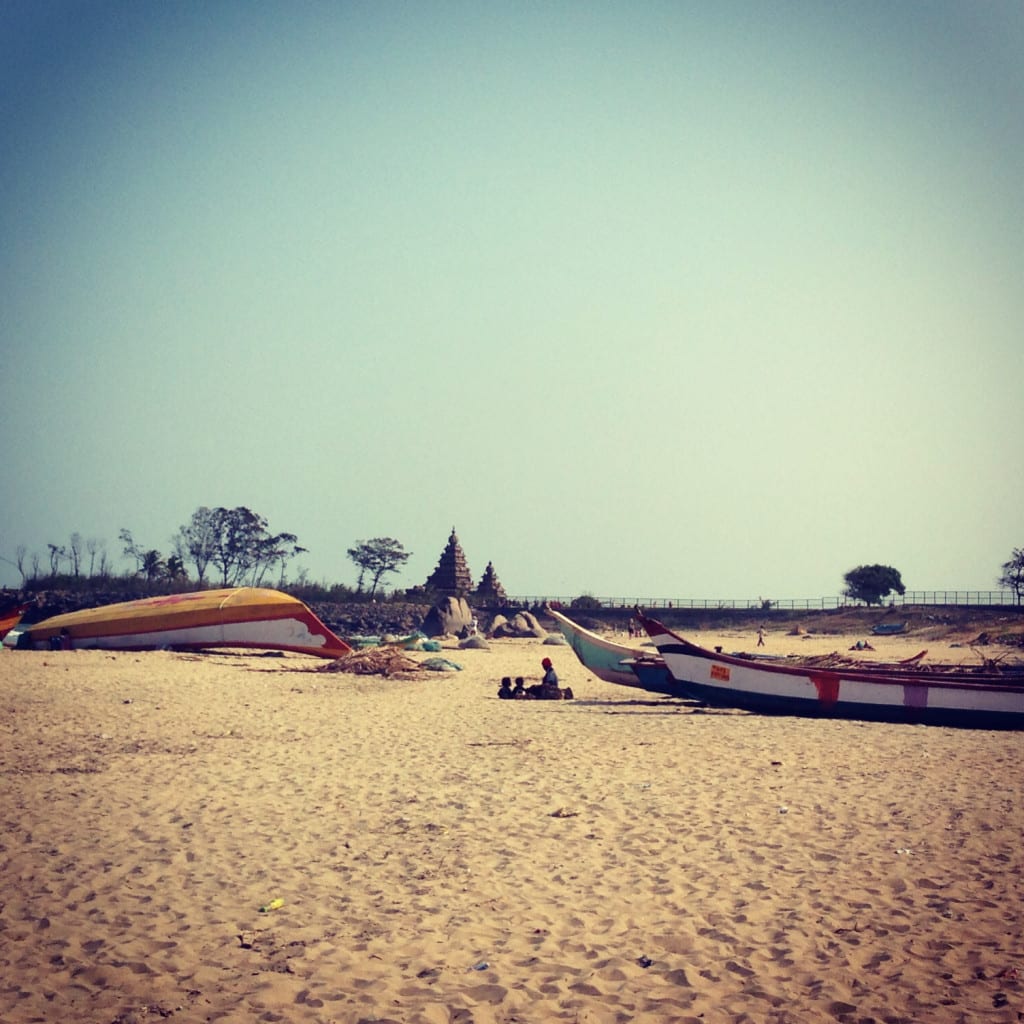 It was here that the Pallava dynasty created some of its most enduring masterpieces. They were fearless warriors but also patrons of the arts, and we can still see today just how creative and talented the Pallavas were. Mamallapuram is the only place in India that you can find examples of all four different types of Indian sculptures. First came the cave temples which were literally created by scooping the rock out to create a cave. Next the monolithic temples were made out of one gigantic piece of stone. Third, were the bas-reliefs which are stories from the Purans carved on a panel. Finally the Pallavas created structural temples, which were built out of stone bricks. You can see how Dravidian architecture graduated here from rock-cut caves to roofed monoliths like the Five Rathas, to the magnificent shore temple in less than century.

There are many cave temples in Mamallapuram depicting visions of gods and intricate wall carvings of heroic acts in mythology. Most are located in a small region starting with the Trimurthy Temple and culminating in the Mahishamardhini Cave, with each telling a story in stone that has endured the test of time. In the center of this area is the highest point in town and two of its landmark buildings, the new and old lighthouse. 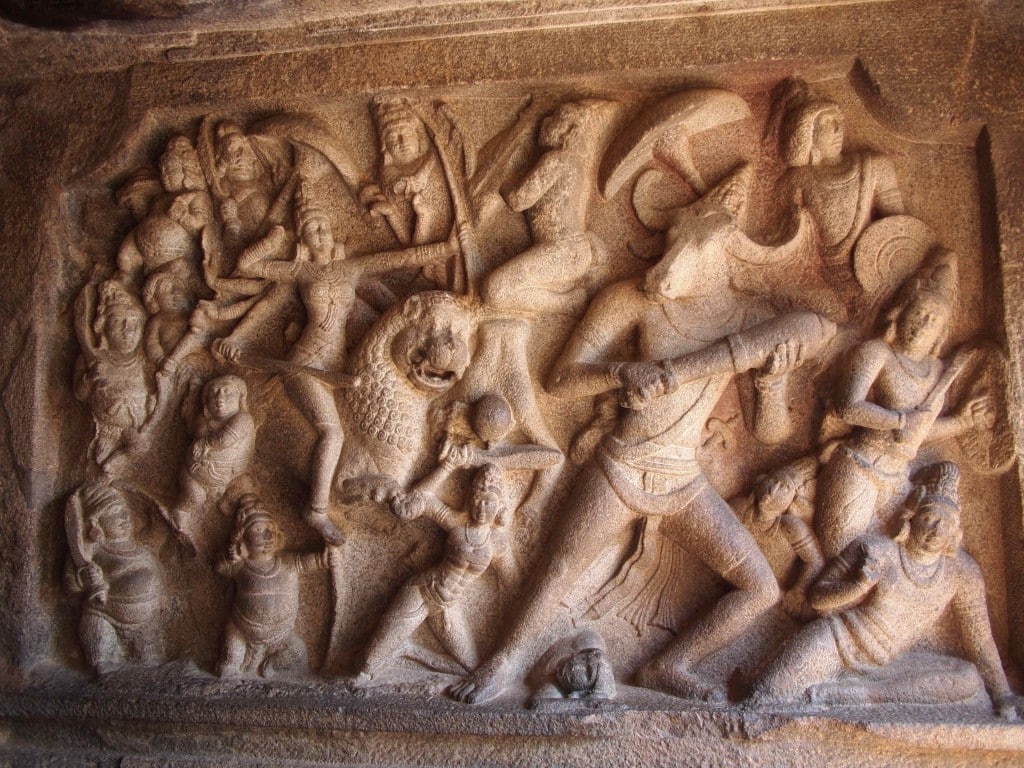 The new lighthouse, with its gleaming white masonry tower and red roof, can be seen from almost anywhere in Mamallapuram, and is a creation of modern architecture that was first used as a lighthouse in 1904. Behind it is the old lighthouse, a structural temple that was built in the 8th century, when charcoal or wood and later a coconut oil lamp was lit here to warn ships as they approached the shore. From the old lighthouse visitors can have a 360-degree view of the town, the surrounding countryside and across to the Shore Temple. 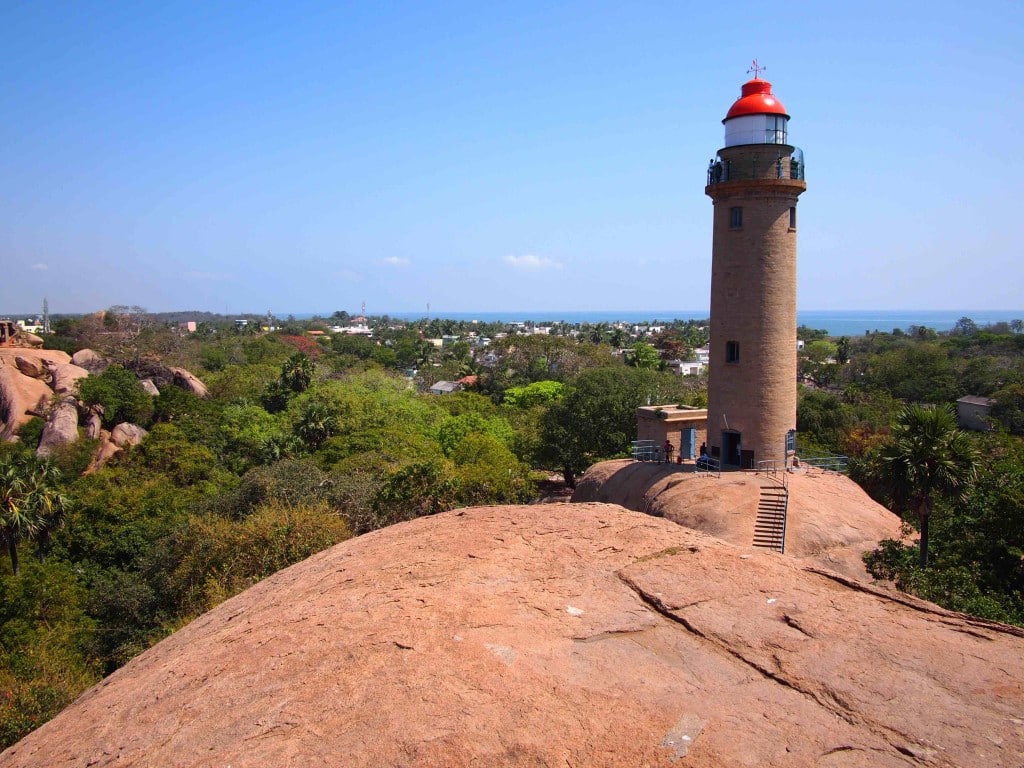 View From The Old Lighthouse

Nearby, the Five Rathas are monolithic temples, carved out of one single piece of rock. They stood for centuries buried under sand until they were discovered by the British about 200 years ago. While each has been named after the five Pandava Brothers from the ancient tale of the Mahabharata, each one is actually an individual temple to a dedicated god. Some are guarded by steeds of their god, including Durga’s lion and Indra’s elephant.  Some have carved panels, others inscriptions and statues, but each stands alone in its tale of devotion, yet collectively they come together as a work of art. 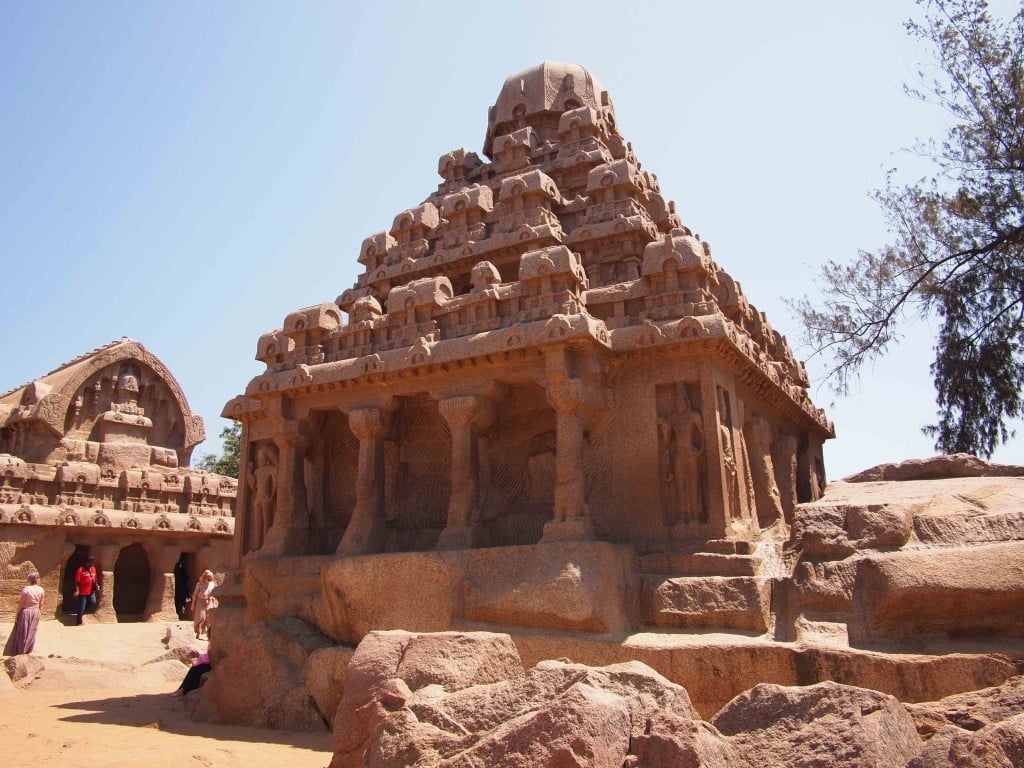 The finest example of bas-relief sculpture is Arjuna’s Penance. Standing at 25 meters wide and over 12 meters high, it is impossible to miss the world’s largest hand-carved bas-relief sculpture. Using two rocks with just a narrow fissure between them, the artists have depicted people from three worlds, heaven, earth and the underworld, who are all witnessing one event,  Arjuna serving his penance as he prays to Lord Shiva to bestow him with powerful weapons. There are over 150 figures carved into this rock in such beautiful detail, from celestial beings to monkeys delicately preening each other, and of course a pair of large, magnificently sculpted elephants. 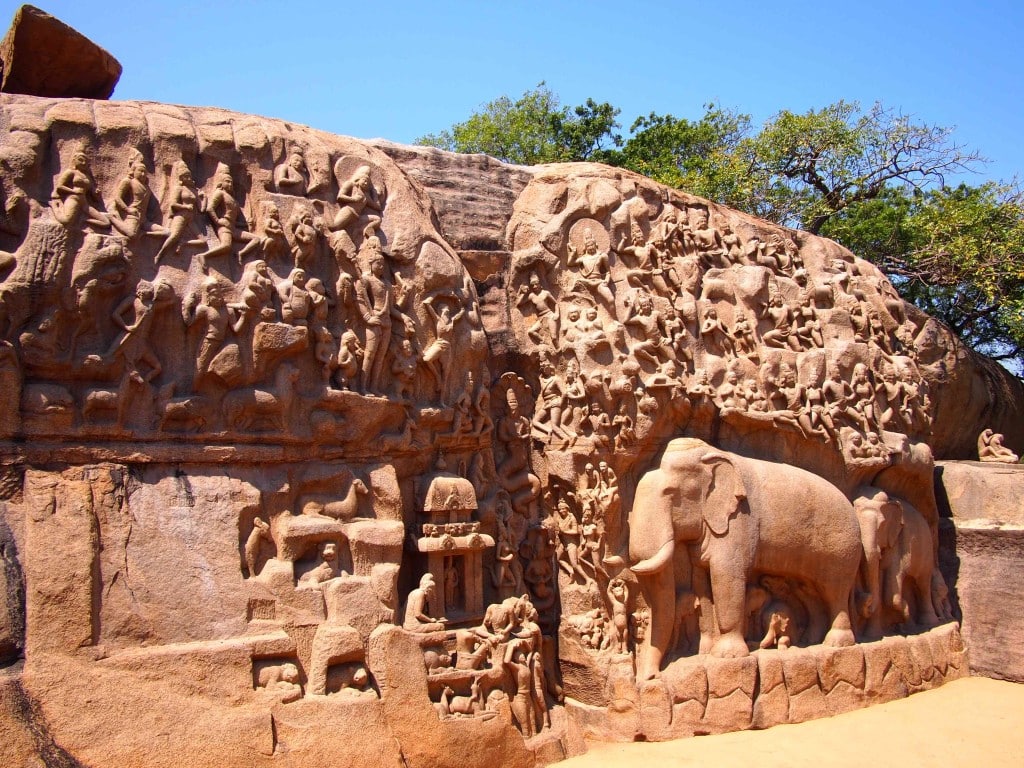 While Arjuna’s Penance is spectacular, the Pallavas last and greatest architectural achievement in Mamallapuram was creating the Shore Temple. The site contains not just one temple but rather three with two towers. Centuries ago it is believed that there were originally seven towers, but the other five have now been lost to the ocean. Two temples are dedicated to Lord Shiva, while one central temple pays homage to Lord Vishnu, who lies peacefully in its inner sanctum. Looking over the Bay of Bengal, this stunning setting is the perfect place to watch sundown or sunrise. 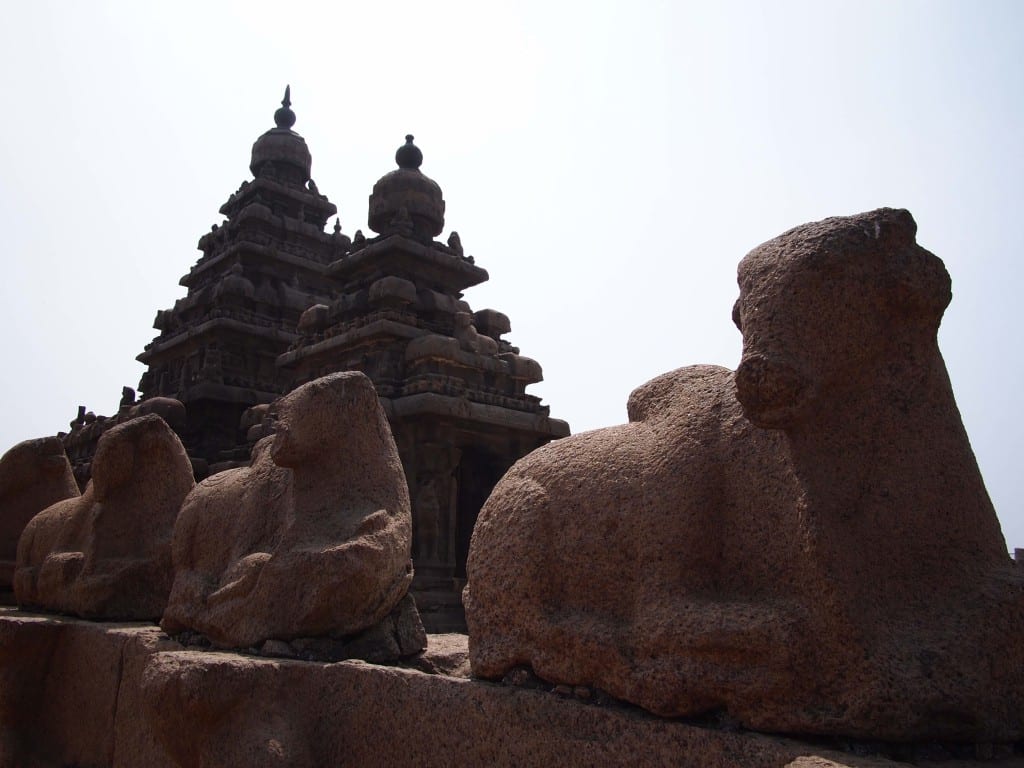 Thankfully these temples weren’t the end of the Pallava’s fascination with architecture. They soon moved onto creating even grander structures that are still standing in Kanchipuram. But for visitors to Mamallapuram, nothing compares to the beauty and charm of this peaceful town that continues to share its stories from centuries gone past with us.