By distinct destinationsJune 6, 2022No Comments

The vibrant nature-culture heritage of the tiny Himalayan kingdom of Nepal has been a magnet for compelling holiday experiences. Adventure buffs from around the world have for decades played out their fantasies in the grand theater of its Himalayan ranges and pristine forestlands. Culture aficionados have been blown away by its unique religious traditions, its layered ethnic narratives and the diversity of its cuisine and crafts. 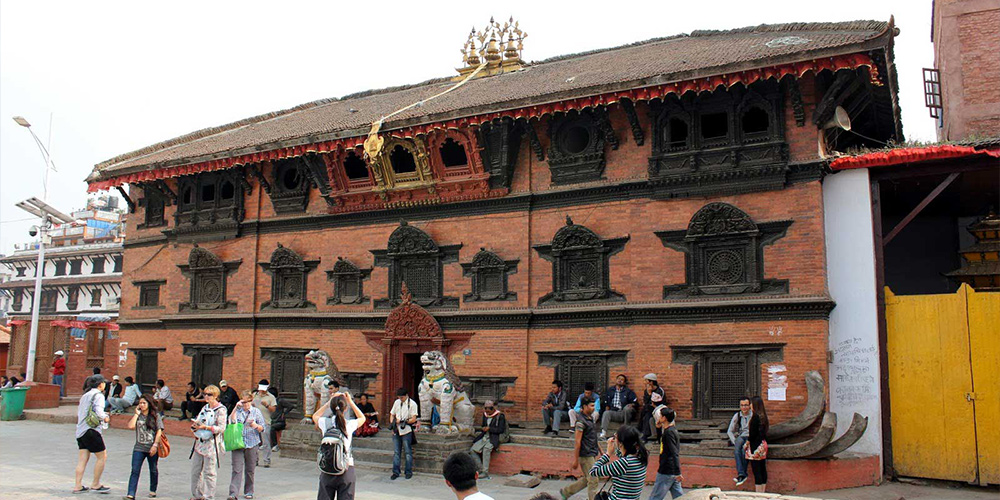 You will love the grand coming together of Nepal’s medieval past and contemporary world in the national capital. Delve deep into the country’s deep-rooted religious pursuits at the bustling Hindu temple of Pashupatinath, dedicated to Lord Shiva. Marvel at the serenity of Boudhanath, the 36m-high stupa searing the skyline. Lord Buddha was born in the village of Lumbini in Nepal. In later years, his journey to Enlightenment would bring him to neighboring India. At the Durbar Square you will encounter a unique Nepalese religious tradition. This is the worship of the living virgin goddess, Kumari, who resides here in deep seclusion in the Kumari Ghar. Join hundreds of devotees awaiting a glimpse of the prepubescent goddess, who embodies the goddess Taleju, tutelary deity of Nepal’s Malla and Shah Dynasties. The Durbar Square, a UNESCO-acclaimed World Heritage Site, is a lively cultural hub where one may also explore the old palaces and shrines and the rich architectural traditions of Nepal. The area is home to over 50 temples, palaces, and courtyards, dating between the 12th and 18th centuries. Take a rickshaw ride to the atmospheric Thamel Bazaar area where the color and action will keep your lens busy for hours.

The lively streets of Kathmandu offer a fine window to the international feel of the city, which is a huge draw for climbers, trekkers, and nature buffs. Kathmandu is the primary gateway to Nepal’s gorgeous outdoors. One of the most thrilling explorations of the Everest area out of Kathmandu is a trek to Everest Base Camp. Another great allurement on offer is the flight to the Base Camp for a champagne breakfast in plain sight of the legendary mountain. Unmissable is the thrilling Everest Mountain Flight, a flypast of its 20 attendant peaks. 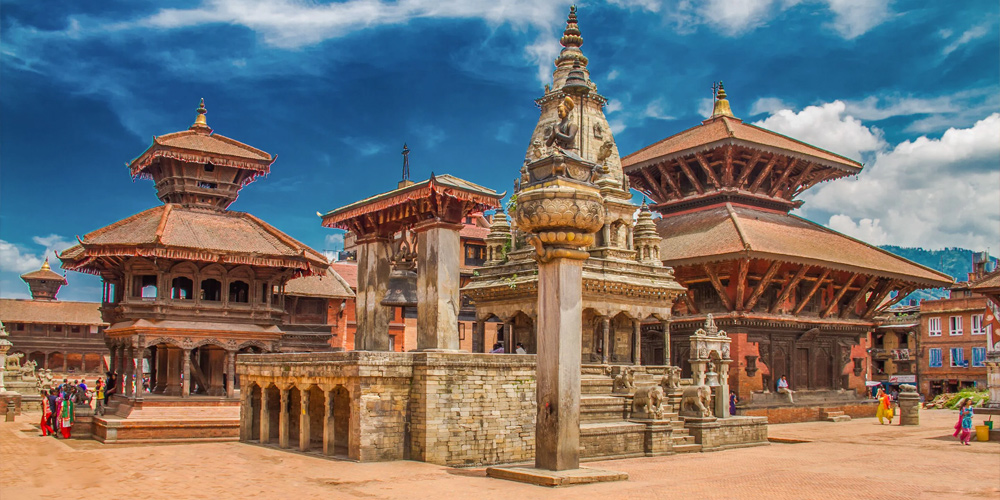 This laid-back city is famous as the city of artisans. Rich in culture and crafting traditions Patan, or Lalitpur is a centuries-old hub for experiencing Newari art and architecture. Explore the Durbar Square area for the exceptional Newari wood carvings and brick work. In the adjoining streets watch craftsmen ply their trade in well-preserved techniques such as the repoussé and lost wax process. Patan’s Durbar Square also features a Kumari Ghar, home to Nepal’s Living Goddess. Throngs gather here, waiting for a glimpse of her at the window for her blessings. Check out the display of vendors at the Mangal Bazaar held in the southeast corner of the square. Pop into the Patan Museum at Keshav Narayan Chowk. It has a rich display of artefacts which shed light on the rich history and culture of the Kathmandu Valley, along with metal crafts, wood carvings. Later you can relax in the small garden here, reflecting over all the exciting things you’ve seen. You might like to visit the Jawalakhel Handicraft Center, which is linked to the nearby Tibetan Refugee Camp. It’s very relaxing watching the women weaving the rugs by hand.

The city has long been recognized for its harmonious blend of Hinduism and Buddhism influences. Hiranya Varna Mahabihar, the shrine from the 12th century, is also known as the Golden Temple. Enshrined here in the courtyard is a superb image of the Buddha. The complex also serves as a monastery with monks going about their daily routines. Look out for the exceptional woodcarvings and repoussé work here. Mahabouddha, an exceptional Buddhist monument of exquisite terracotta art form, is a 14th century marvel featuring thousands of engraved images of Lord Buddha. The four stupas on the four corners of Patan are believed to have been erected by Emperor Ashoka of India in 250 BC. Kumbheshwar temple, dedicated to Shiva is the only five-storied pagoda in Patan. The Jagat Narayan Temple a tall Shikhara-style shrine, was raised to Lord Vishnu. Behind the Chandeshwari Temple is a tranquil pond where one can relax and feed the ducks. 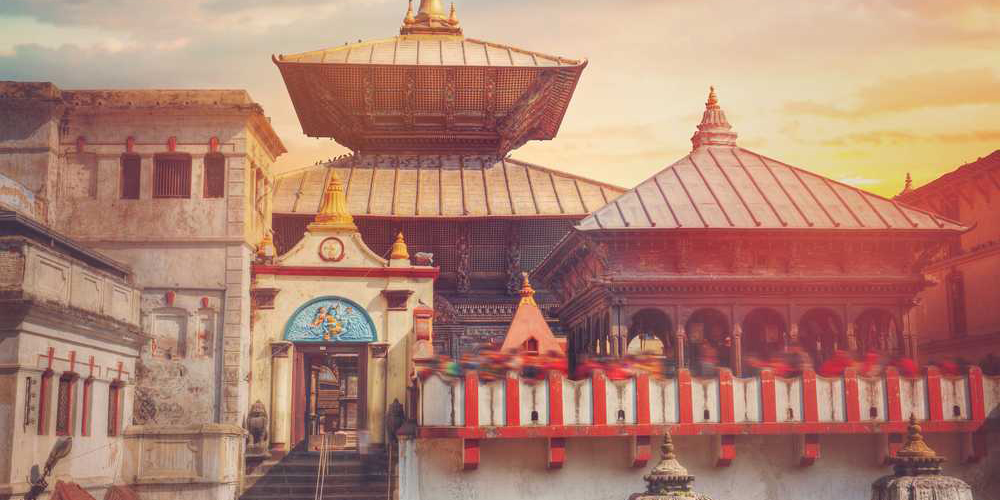 The medieval city of bustles along at a slower pace than hectic Kathmandu. It once served as one of the three kingdoms of Nepal. Because of its strategic position on the trade route between India and Tibet, Bhaktapur has always been a lively cross-cultural center. Spend quality time exploring the rich pickings of the Durbar Square, also a UNESCO acclaimed World Heritage Site. Along with its line-up of temples, it also features the Kumari Ghar, home of Nepal’s Living Goddess. Nepal’s centuries-old living art and craft traditions, an integral part of Nepalese life, are reflected in the Newari woodwork and pottery traditions of Bhaktapur. Check out the skilled workmanship at the Palace of 55 Windows and the Golden Gate in the Durbar Square. You will enjoy the opportunity to watch the potters at work at Pottery Square. Pop into the Toni Hagen Museum with its display of sculptures in stone, wood, and metal by local artists. Revive yourself from all this sightseeing with the famous Ju Ju Dhau (King Curd) of Bhaktapur. Look forward to an interesting time over a Newari meal at a local master wood craftsman’s (Shilpkar) home. 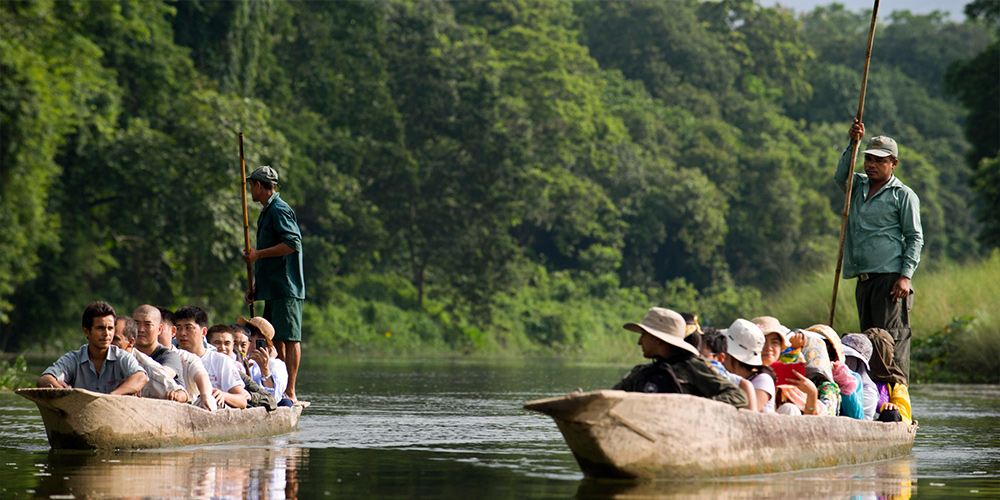 The erstwhile hunting preserve of the Nepali royals offers thrilling explorations of one of Nepal’s most pristine natural settings. A UNESCO World Heritage Site, the national park was established in 1973. With a naturalist by your side on a jeep safari, keep your eyes peeled for popular residents such as one-horned rhinos, tigers, reclusive sloth bears, wild boar and wily leopards. Chitwan is a birding paradise with over 450 avifaunal species. You can also enjoy a leisurely walk in the jungle with the naturalist sharing his wealth of knowledge about the secretive world of the flora and fauna of Chitwan. Take a canoe ride for croc-spotting thrills on the Rapti River. Discover fresh new aspects of Nepal’s cultural heritage with a visit to a Tharu village. The community is said to be descendants of the kingdoms that were flourishing at the time of Buddha’s birth. Enjoy the colorful cultural programme over a shared dinner with Tharu specialities. 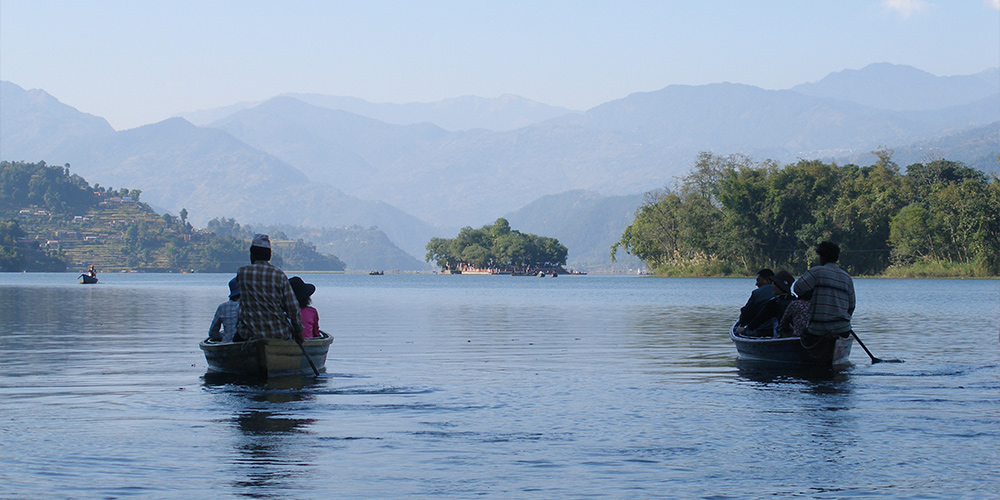 The stunning vistas of Pokhra tempt you to explore the region even more closely. A fabulous collation of tranquil lakes and peak views of the city is the base for treks in the legendary Annapurna area. Before you venture out, spend time at the International Mountain Museum for a quick introduction to the legendary Himalayas and history of mountaineering. At the Gurkha Museum, explore displays of Nepal’s most storied warrior clan. You can spend time here enjoying coffee and conversations with Ex–Gurkha Army personnel. Spend lively moments with the Gandharba community, an ancient caste of musicians who are fighting to keep alive the traditional music and entertainment in rural Nepal, despite the invasive contemporary influences in the music scene of the country.

From the World Peace Stupa, commissioned by Buddhist monks from the Japanese Nipponzan Myōhōji organization, savor the impressive views of the Annapurna range and Pokhara city. Unwind at leisure on a boat ride on Phewa Lake and then follow it up with a quick stop at the Tibetan Refugee Camp. 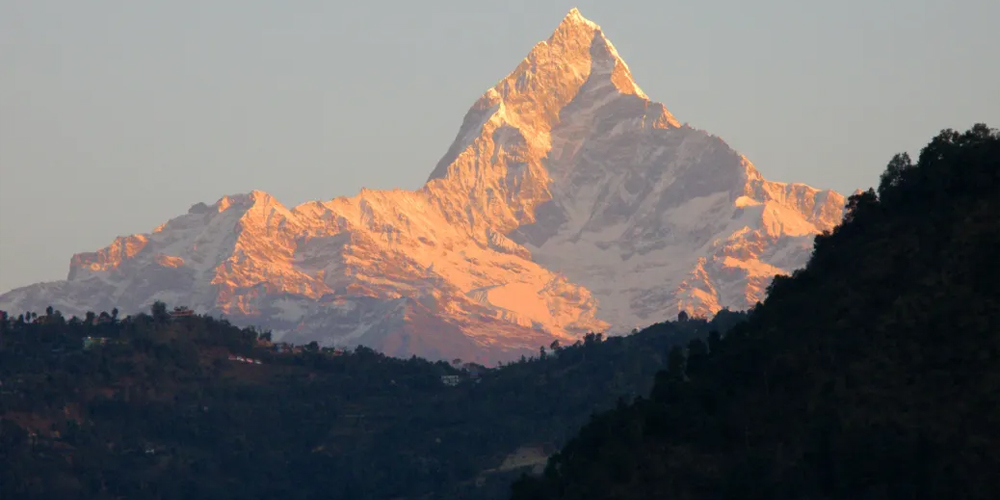 The splendid vistas of Nayapul offer a window to the precious countryside you will traverse on the 2hr trek to Birethati to Sanctuary Lodge. The trail follows a ridgeline in the lower foothills of the Annapurna while serving up mesmerizing views of the Pokhara Valley along the way. You will then head down to the Modi River Valley where the Sanctuary Lodge awaits your pleasure. As you relax at the lodge crafted by local artisans, take in the spectacular views of the sacred Fishtail Mountain. 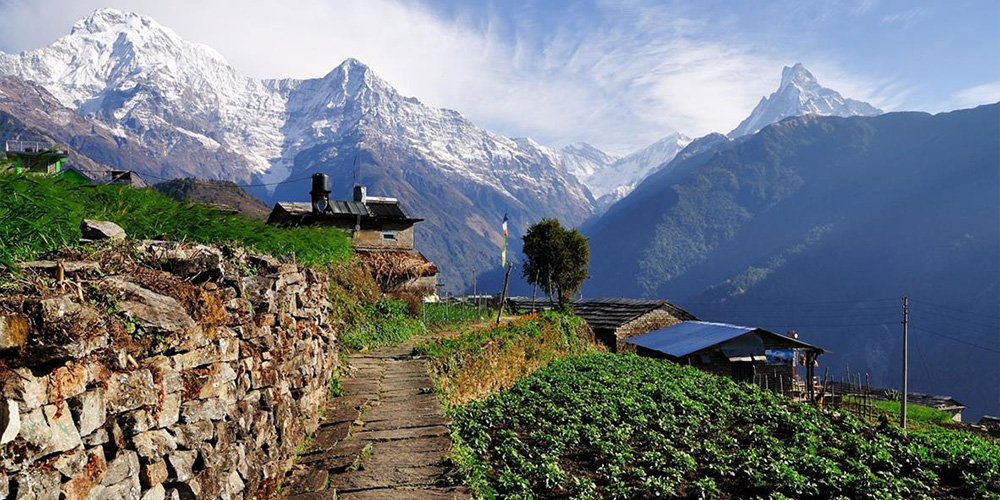 The Sanctuary Lodge introduces you to the rich crafting traditions of the local community. From here you can trek to Gurung Lodge, which follows the local architectural traditions as well. All rooms here open up on valley and mountain views. A walk to Tanchok village nearby and interactions with the villagers also offers rich insights of the rural culture in this region. Majhgaon and its surrounds provide many opportunities for birding and getting to know all about the local flora. You can also do a short trek to Gurung Hill with its gorgeous views.

On your return to Pokhara you can do a spot of birding in the beautiful setting of Chisapani Forest. You can follow it up then with a nature village walk, while savoring the boundless beauty of the Annapurna’s and Machhapuchhre mountains. 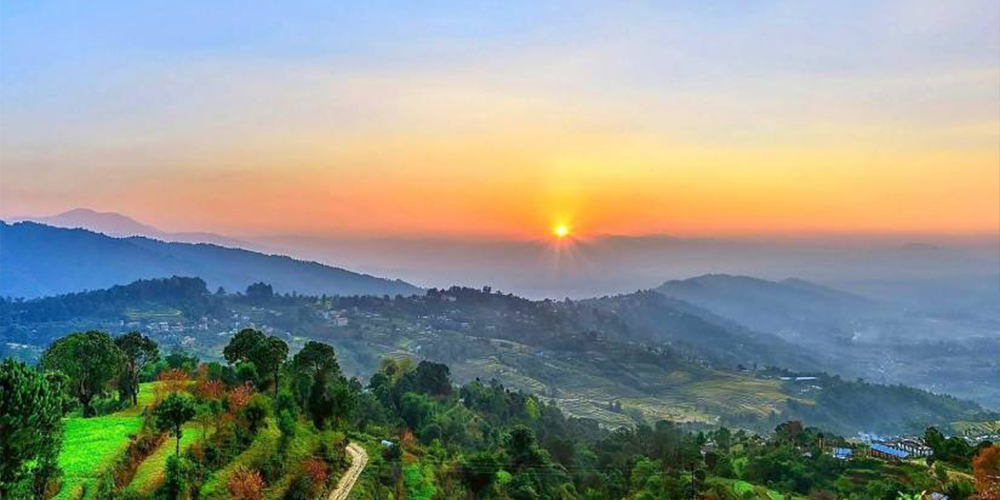 After flying back to Kathmandu, you have another exciting spot to explore. Dhulikhel village offers an opportunity to enjoy the superb sunrise views from your hotel before you drive to Namo Buddha, located atop a hill. This spot is famous for its Buddhist monastery. Namo Buddha offers an excellent window to Nepal’s linkages with the Buddha and the narratives associated with his various avatars.