Unforgettable Highpoints Of Your Bhutan Odyssey

One of the most sought-after holiday destinations by discerning travelers, Bhutan delights you with its unique take on happiness, tourism, and interfaces with the traveling public. You will treasure the very moment spent amidst the natural splendor and culturally vibrant spaces of this country which have mindfully opted to open its doors to the global traveling community with caution.

The national capital of Bhutan is the perfect amalgam of its alluring past and a host of vibrant visuals of its contemporary avatar. Home to over 120,000 citizens, comprising a mix of multi-ethnic settlers, Thimphu, which is located set in the Wang Chuu valley carved out by the Raidak River, is a cauldron of many cultural delights. It’s an ideal place to start your Bhutan Odyssey. Heritage sites, museums, culture hubs, the colorful market scenes all provide an excellent window to tempt you to plunge into many immersive pursuits that keep this city so vital and interesting. 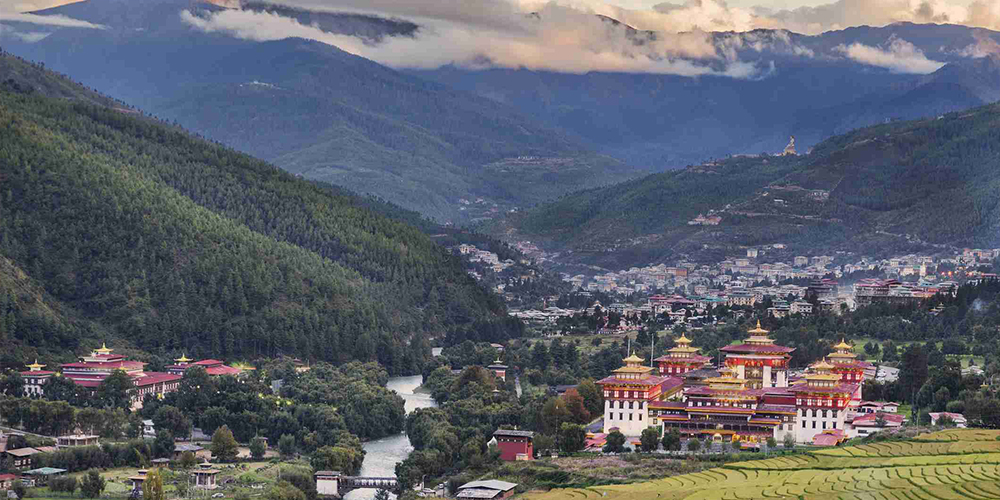 While Thimphu’s contemporary blandishments are richly evident in the street culture–read fashion, shopping, karaoke nights at the popular watering holes, its roots in the past are showcased in its architecture, students, and workers in national costume in working hours, the vibrant festivals and favorite past times, such as archery, once a war tool and now an Olympic-status sport. What drives this thinking is the government’s take on instilling a sense of value and pride in its people about Bhutan’s national traditions.

Head out for the massive 17th century Tashichho Dzong, the royal secretariat, which serves as the seat of governance. Located here is the Golden Throne Room, Office of His Majesty the King, seat of the Royal Government; it also serves as the summer residence of His Holiness the Je Khenpo and Monk Body. Marvel at the decorative gilded carvings skirting the magnificent statue of the Shakyamuni Buddha, the gorgeous wood carvings, and mandalas. 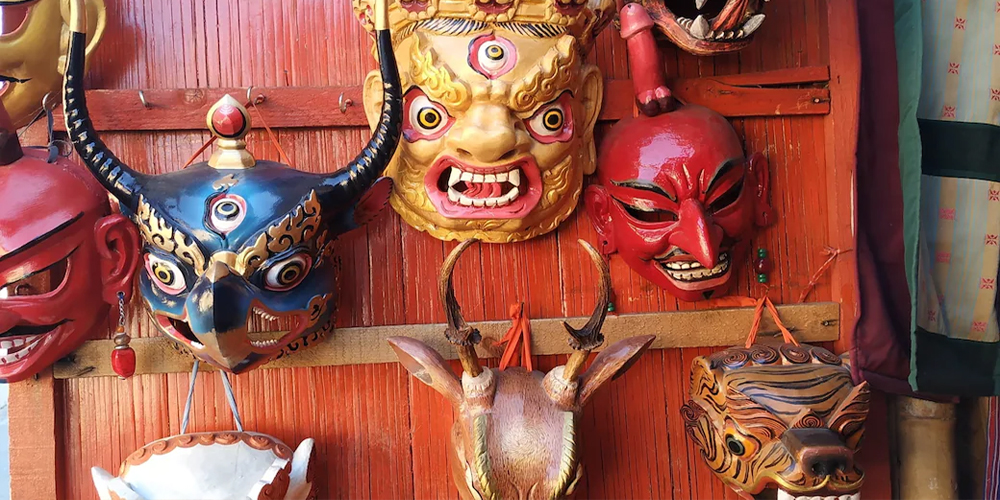 The serene spot that is the National Memorial Chorten is a lively hangout joint for locals who gather here to gossip, feed the pigeons, turn the enormous wheels and marvel at the paintings of the fearsome deities and exotic mandalas. A memorial was built by Her Majesty the Royal Grandmother in 1974 in memory of His Majesty the Third King who passed away in 1972.

Follow the stream of locals on weekends, as armed with picnic hampers. They head out to the lovely Kuensel Phodrang Nature Park. Of note, here is the massive bronze Dordenma Buddha piercing the skyline at 169ft. Another popular spot for a fun- filled hiking experience is the 12th century Changangkha Lhakhang monastery set atop a ridge overlooking Thimphu. Soak in the views and the benedictions of the seated Avalokiteshvara, the Buddha of Compassion, enshrined in the chapel. 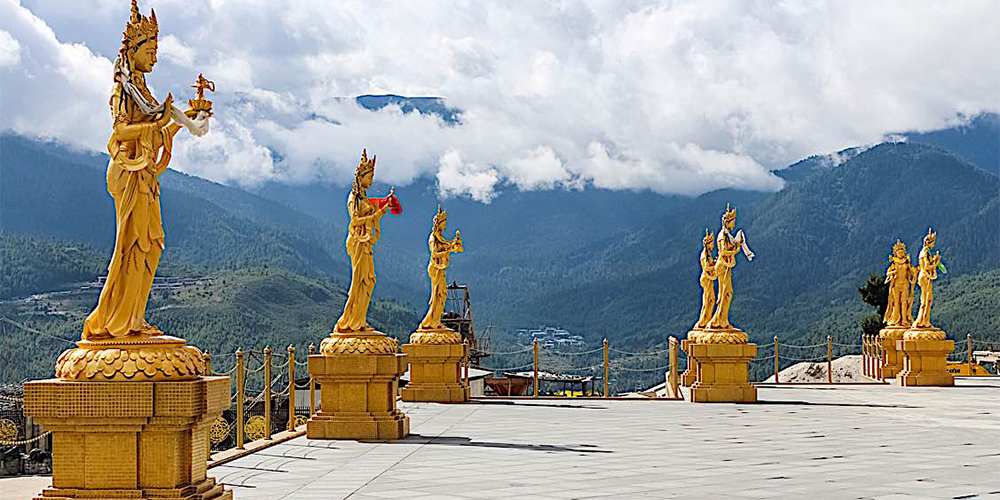 A much-recommended institution to explore Bhutan’s crafting heritage is the Choki Traditional Art School (CTAS). It was founded in 1999 by veteran artist Dasho Choki Dorji, to keep alive Bhutan’s traditional zorig chusum or thirteen arts and crafts. These represent hundreds of years of cultural practice, and many Bhutanese see their identity and history reflected in these crafts. The Voluntary Artists’ Studio (VAST), also set up in the 90s, is the initiative of Karma Wangdi, or Asha Karma, the father of contemporary Bhutanese art.

Browse through the exhibits at the Royal Textile Academy and Museum featuring the splendiferous textile heritage of Bhutan. Join the locals at the Folk Heritage Museum, which has transformed into a popular cultural hub. The restaurant here attracts the well-heeled and city elite.

The gorgeous valley of Paro Valley, by the picturesque confluence of the Paro Chhu and Wang Chhu, offers many wonderful experiences of Bhutan’s legendary natural heritage. The walking and hiking trails, the scenic vistas and interfaces with the local community in their homes and marketplaces all add to a variety of rich and diverting holiday memories. 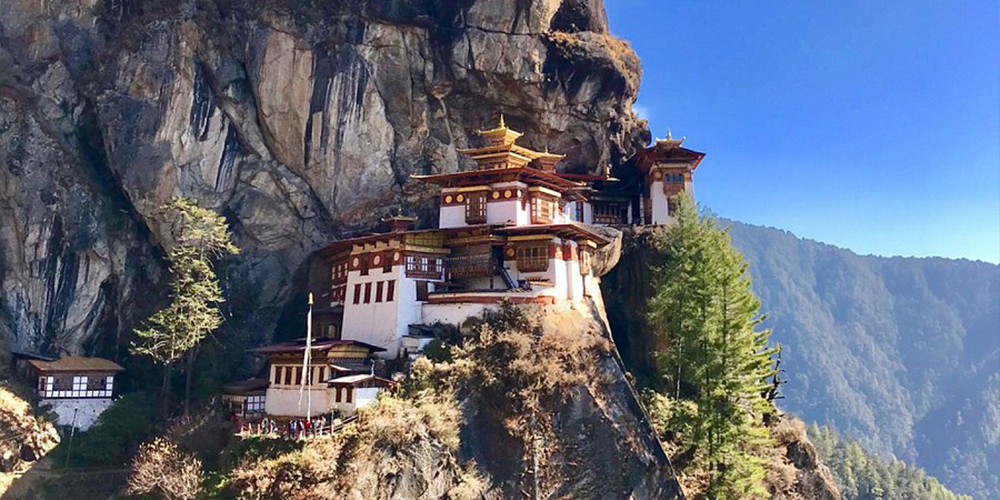 A spiritually enriching experience can be combined with a high adventure trek the Taktsang Monastery or Tiger’s Nest, atop a precipitous cliff in Paro. The legendary monastery marks the spot where Guru Padmasambhava, the 8th century sage, who propagated Tibetan Buddhism, flew here on the back of a tigress to mediate in a secret cave. This is one of the country’s most important pilgrimage sites.

The hiking trail to the 17th century Paro Dzong or Rinchen Pung Dzong offers stunning views of the valley. It is the hub of the local administration and the district monastic body. Unforgettable scenes can be captured on your lens of the pageantry of the lavish annual Paro Tshechu Festival held here. You should also try and fit in a trip to the 7th century Kyichu Lhakhang Buddhist temple, or the ‘Blue Temple’ famed for its traditional Bhutanese temple architecture, gorgeous murals and the pristine surrounds. 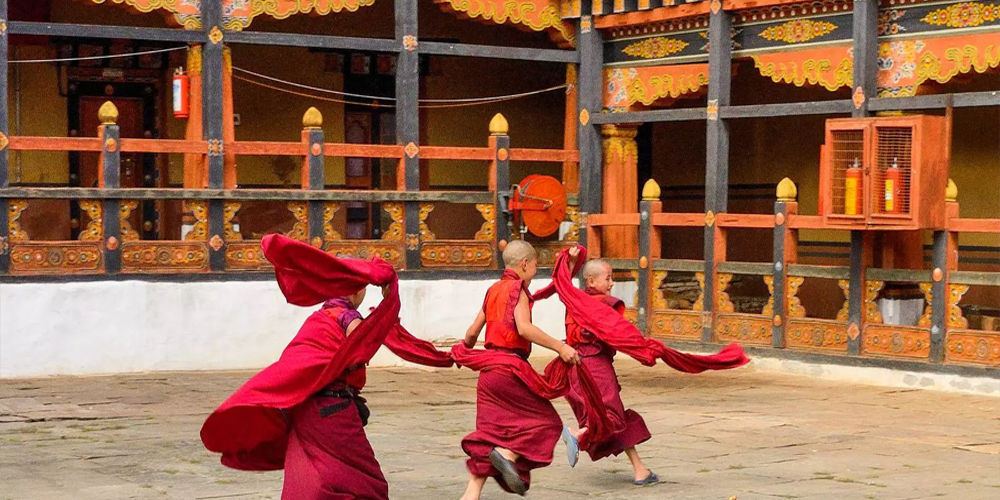 Take time out to enjoy traditional Bhutanese meal with the national dish Ema Datshi at a local restaurant in Paro market, and a glass or two of the several variants, such as beer from red rice, made at the Namgyal Artisanal Microbrewery in Dumsibu.

Prior to the shift of governance to Thimphu, Punakha served as the old capital of Bhutan. Punakha Dzong, set upon the spot which marks the confluence of two rivers known as Pho-Chu and Mo-Chu is worthy of a visit for its historic significance. The second oldest Buddhist dzong in the kingdom, it houses some of Bhutan’s most sacred relics of the Kagyu School of Buddhism, as well as the sacred remains of the first Zhabdrung Rinpoche. It serves also as the winter residence of Je Khenpo, Chief Abbot of the Kingdom, and the Central Monk Body. While white water rafting on the rapids of the Pho-Chu and Mo-Chu, you get excellent views of this iconic dzong, along with that of the old suspension bridge, a popular selfie-point now.

A hike up a small hillock brings you to the Temple of Fertility or Chime Lhakhang, dedicated to Lama Drukpa Kuenley, “The Divine Madman”. The legendry Buddhist master and one of Bhutan’s most revered saints, the ‘mad lama’ inspired the phallus worship ritual in Bhutan. The phallus, a venerated esoteric symbol, is said to avert the evil eye and bring good luck. This pilgrimage hub attracts barren women who seek his blessing to bear children. 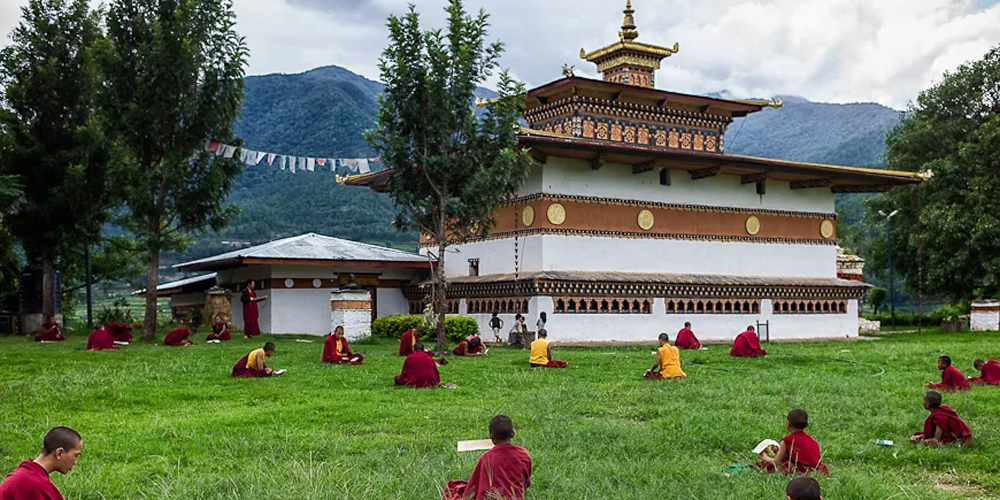 You will love the local wellness ritual of indulging in the healing processes of a hot spring bath. Springs are also considered sacred, as they are seen as blessings from the Buddha. The Gas Hot Springs have long been fabled for their therapeutic properties and locals and tourists alike will be found gathering at this post to enjoy this natural therapy for various body ailments. Located near the banks of the Mo Chu River in Punakha district, Gas Hot Springs should definitely be on your bucket list.

You can enjoy an exclusive experience discovering the secret world of Bhutan’s monastic pursuits at a Buddhist monastery in Bumthang. You get to spend a day with the monks behind these closed doors and learn much about this sacred space of rituals, prayer and worship, education, and learning. Even more precious are the times spent in a prayer room with junior monks. 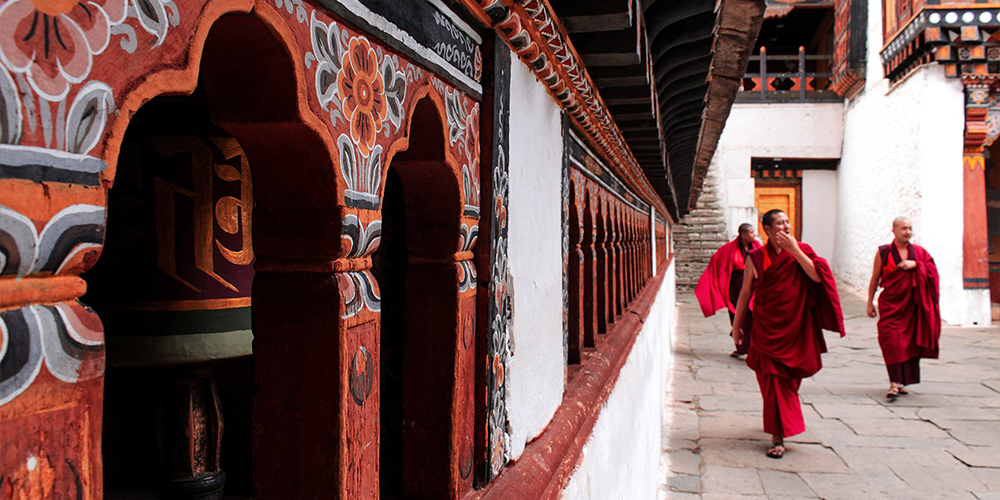 Immerse yourself in Bhutan’s ancient Buddhist rituals as you take part in the richly symbolic prayer flag hoisting ceremony near a local shedra or monastic school. Vajrayana Buddhism, also known as Tibetan Buddhism, has been practiced in Bhutan under the influences of the teachings of Guru Padmasambhava since the 8th century. The nearby Black Neck Crane Center in the Phobjikha valley is the winter sanctuary for the migratory rare and endangered, black-necked cranes. 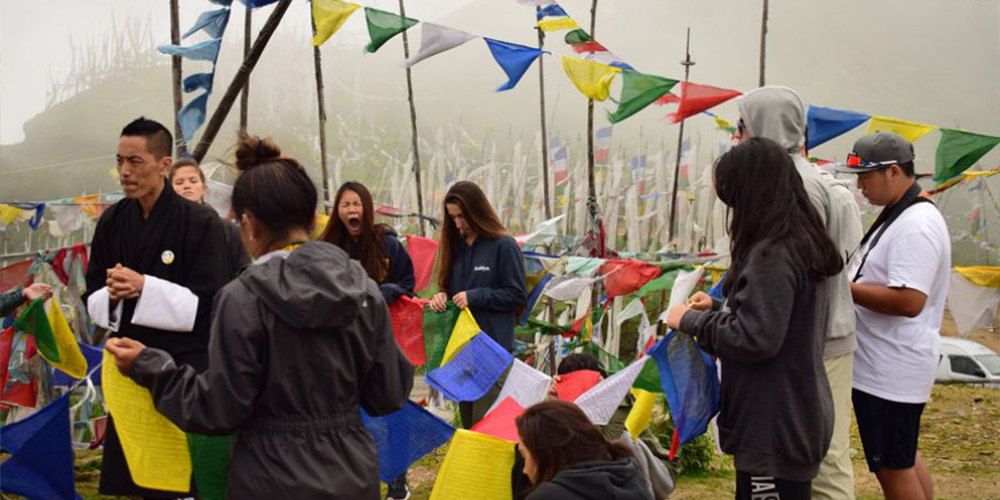 Bhutan offers visitors a veritable treasure trove of unique experiences for those who thrive on novel, out-of-the-box holidays. Each visit encourages you to delve deeper into this fabulous Himalayan kingdom.