By distinct destinationsJanuary 22, 2023No Comments

The unabated global allure for India’s exotic wildlife and ancient jungles is underpinned each year as streams of wildlife enthusiasts scatter across the country when the game parks open for visitors in the winter months. Though there is a smattering of sanctuaries and national parks that remain open all year round, the rush of visitors speeds up in the pleasanter days from mid–November in one of the world’s most exciting ‘must see’ holiday hub. What’s enviable for other holiday destinations in the world is that the glory and the sheer variety of its fauna and flora make India such an amazing wildlife destination. Project Tiger and Project Elephant, along with the success stories of saving the Asiatic lion, Great Indian one-horned rhino, barasingha and Great Indian Bustard, beautifully showcase low-impact tourism and good conservation practices. Suffice to say, there’s the bonus of some fabulous cultural experiences on the sideline of a safari tour. 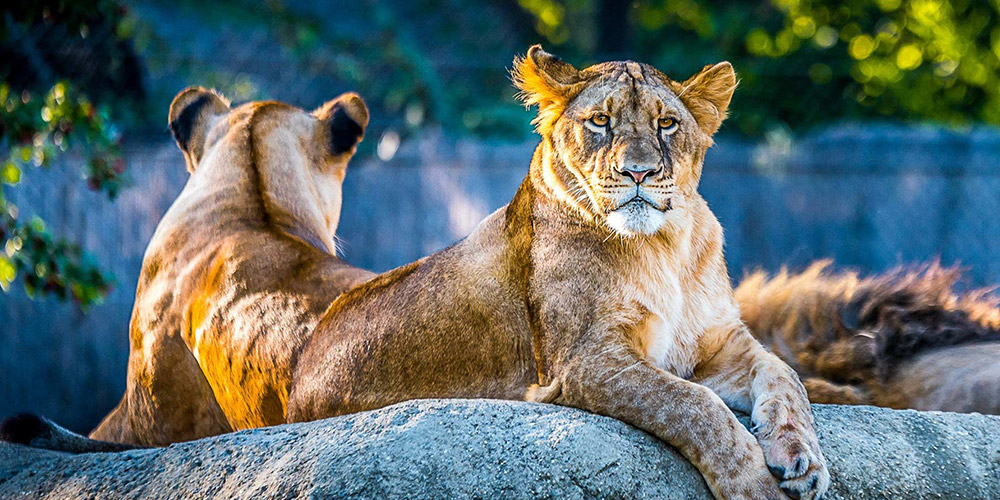 Spread along the foothills of the Central Himalaya, the jewel of India’s wildlife habitat, Corbett is within easy driving range from National Capital, Delhi. The centuries-old stamping ground of two of India’s most iconic and endangered animals—the tiger and the Asiatic elephant, Corbett is India’s first National Park and first Tiger Reserve (1973) which came under the umbrella of Project Tiger, a world-wide conservationist programme to protect this apex predator from extinction. Ranked among the world’s premier game parks, Corbett stands out for the exceptional work put into tiger conservation. The Dhikala Zone and the Bijrani Zone are the most sought after tourist hotspots. There is a plethora of holiday resorts around the periphery of the park, but an unforgettable stay can be enjoyed in one of the Raj-era Forest Rest-houses here for a more intimate experience of the forest and its wild denizens. The sal forests are also home to over 50 species of mammals along with 25 of reptiles and an astonishing variety of insect species; it’s also a paradise for birders with its wealth avifauna–600 species and counting. Do pop into the Corbett Museum at Kaladhungi showcasing the exploits of Jim Corbett, the legendary hunter-turned-conservator, who played a pivotal role in this forestland becoming a protected area. Open-15 Nov-15 June. 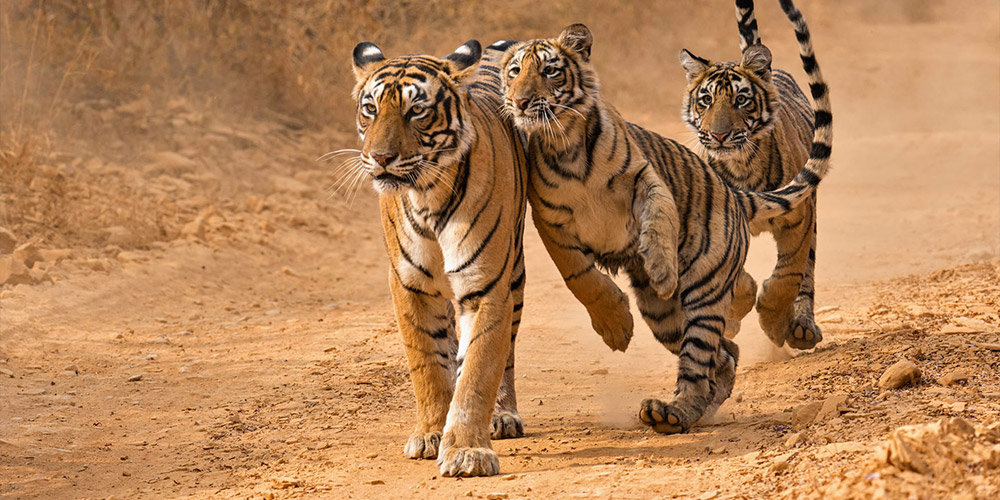 If you are done with the delights of Agra or Jaipur, you really must plan a trip to the fantastic Ranthambhore National Park, readily accessible from both these tourist cities. Tiger-spotting is the big draw here, but considering these amazing forestlands with their lovely water bodies–croc-spotting and avifaunal adventures should be very much on the cards. So pack your bird book and binocs and safari color clothing. It’s important to blend in with the colors of the jungle and follow the safeguards and ‘eco-centric’ guidelines for a wonderful safari. Straddling the junction of the Aravali and Vindhya ranges, Ranthambhore is blessed with an astonishing biodiversity that supports the tiger and his natural prey in huge numbers. Once a princely game reserve, the jungles of Ranthambhore were rich in predators, many of which sadly fell to the guns of sport hunters. Hunting can only be done with your camera lens. Today you can only hunt them by camera. That said, Ranthambhore is still one of India’s best tiger-spotting wildlife reserves and part of Project Tiger since 1973. Steeped in history, Ranthambhore Fort dates back to the 10th century, while the luxuriant verdure is punctuated by three lakes. Open Oct-June. 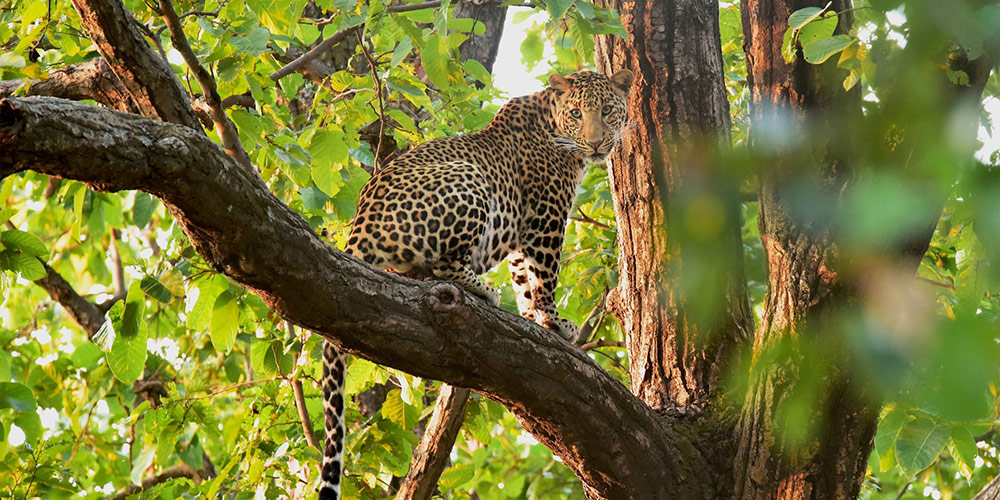 What’s unique about Bandhavgarh is that it’s the world’s top tiger-spotting hotspot as it’s got the highest density of the tiger population. The forests of Bandhavgarh, in Madhya Pradesh, are said to have inspired Rudyard Kipling’s famous Jungle Book, with the inimitable Mowgli, Bagheera, Ballu and Sher Khan. Bandhavgarh jungles are also traditionally the white tiger jungles of yesteryears. These forested expanses of served as the private hunting grounds of the rulers of Rewa the original home of the rare white tiger. The last of these was captured in 1951 by Maharaja Martand Singh. However, no white tigers have been reported from the wild in over 50 years. Yet, back in the day, if you wanted to hunt or see the unique white tiger this was the place to be. Thick sal forestland, interspersed with swathes of bamboo, grasslands, shrubs and meadows across the valley floors, offers easy opportunities for good sightings. Jeep safaris veer towards the tourist zones where the chances of spotting tigers are high, and glimpses of deer and monkeys guaranteed. Porcupines, sambhar and muntjac, hyenas, foxes and jackals appear occasionally in the open country. If luck is on your side, you might see the elusive leopard or the nocturnal sloth bear. Open Oct- June. 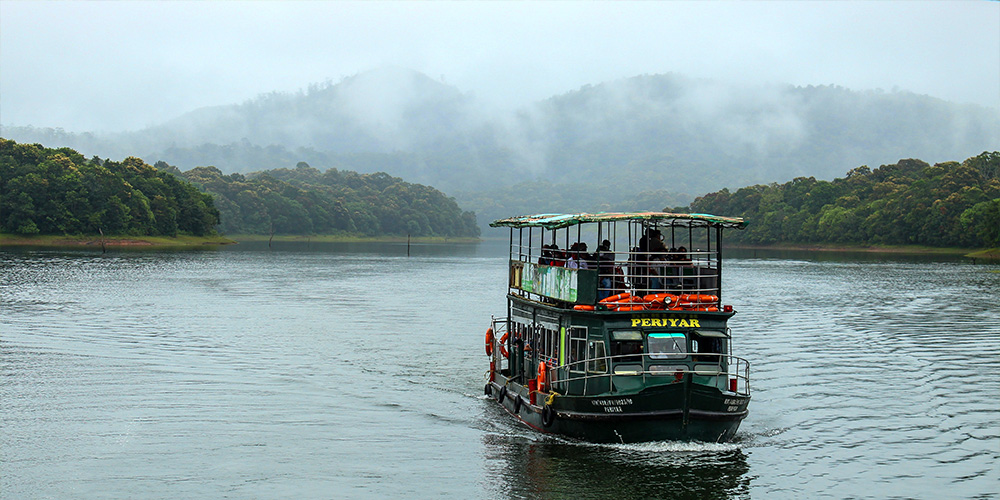 Sequestered in the bio-diverse splendor of the Western Ghats and easily accessed from Thekkady, Periyar, is your go-to safari hub in South India. It lies in the plantation rich expanses of the Cardamom Hills in the Idukki district of Kerala. Go rich in expectations for sightings of the elusive tiger or and Asiatic elephant, as Periyar is the ancient stamping ground for these exotic species. While jeep safaris are lovely, even a boat ride can offer sightings of animals along the water’s edge of the Periyar River, the lifeline of the park. September and March (though it’s open year round) are great for viewings of the migratory avifauna lured in by Periyar Lake. Periyar Tiger Reserve ranks high amongst the line-up of the country’s oldest protected habitats. What’s also unique here is that the tourism department has arranged several eco-tourism activities, including boating, a Night Patrol trek (3hr slots) with the forest guards and, for the more fit; there’s even the Tiger Trail Trek Package — which includes camping in the forest for a night or two with armed guards. Open Sep-Mar.

India is home to 106 national parks and 567 wildlife sanctuaries. So, you have every reason to make many trips to immerse yourself in the country’s fabulous wildlife heritage for the most rewarding wilderness experiences in your life. Given that India has nearly 6.5 percent of the world’s known wildlife species, it really has much to crow about when wildlife buffs come a-running to its many game parks.