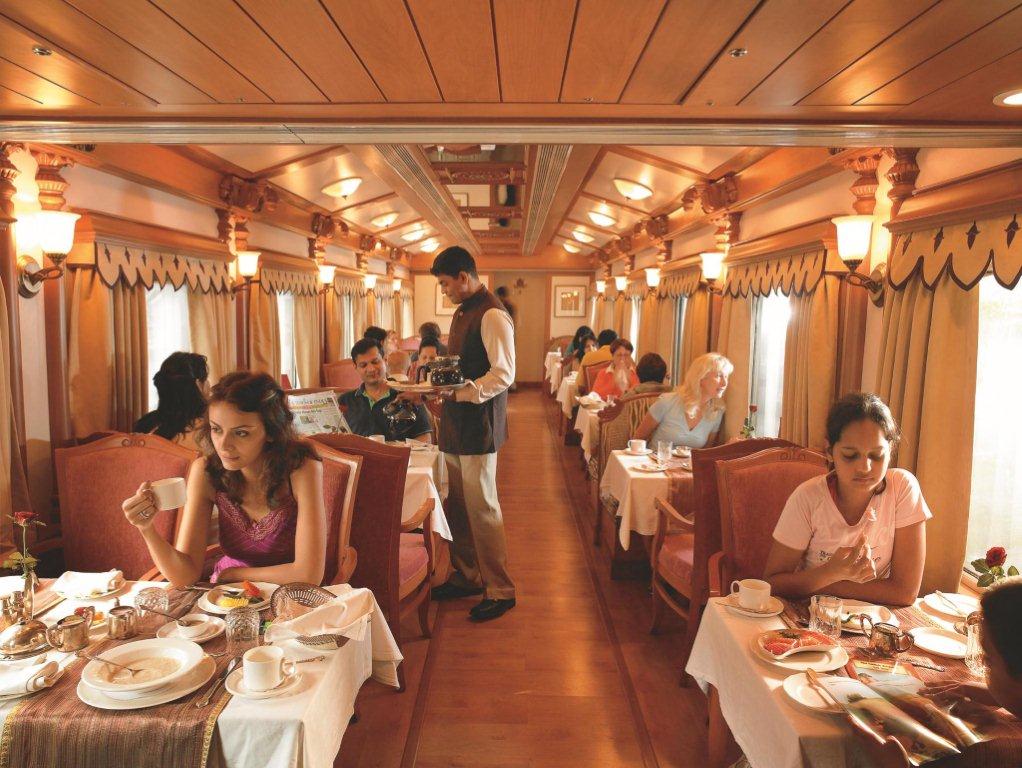 An alternative to long drives in India is to watch the scenery go by from the carriage of a luxury train. It’s a comfortable way to see the hinterland and be a part of the landscape as you traverse the plains and deserts on your Indian holiday. No need to wait around crowded airport terminals or put up with potholed paths. The lulling clatter, the rhythmic motion, the unhurried pace, punctated by leisurely halts at all the best destinations make for a luxury tour you’ll never forget. 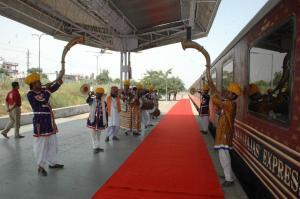 “All aboard” the Maharajas’ Express (photo courtesy of SITA)

This train has been heralded as the ‘World’s Leading Luxury Train’ at the World Travel Awards two years in a row. The royal treatment may bowl you over, but it doesn’t stop at the rich interiors and the semi precious stone-studded décor. This luxury train features 20 deluxe cabins, 18 junior suites, 4 suites and even a Presidential Suite that takes up an entire carriage.

Panoramic windows give you the best viewing as you travel on one of four routes – all of which include the Golden Triangle of Delhi, Agra, and Jaipur. You can choose if you’d like to visit Ranthambore National Park, where tigers roam, and Udaipur, the City of Palaces, or Khajuraho, the city of temples, some of them erotic, or if you’d prefer the ancient, holy city of Varanasi. Whichever opion you choose, you’ll have time in the charming pink city of Jaipur’s bazaars and palaces, as well as in Agra, where you can take in the poetic Taj Mahal, the resplendent Agra Fort and magnificent Fatehpur Sikri. 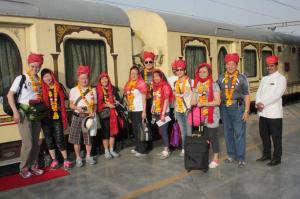 Just like Maharajas, getting ready to board the Palace on Wheels (photo courtesy of SITA)

Travel like the kings and queens of yore in this opulently decked out train. Boasting wood panelling, hand made artefacts, modern restrooms, lounges, restaurants, bars and air conditioned rooms, all14 coaches are named after royal Rajput states in Rajasthan. Starting from Delhi, you’ll get a comprehensive tour of the Rajasthani desert, ending in Agra, home to the fairy tale splendor of the Taj Mahal. Over seven nights and eight days, you’ll travel to the pink city Jaipur, the wildlife park of Ranthambore, the lake city of Udaipur, followed by Jaisalmer with it’s golden fort, the only living fort in Asia, and colorful Jodhpur, with a pit stop in Bharatpur, home to a bird sanctuary, and on to Agra. You’ll cover the Golden Triangle in luxury and leisure, with ample time to really get a feel for the region. 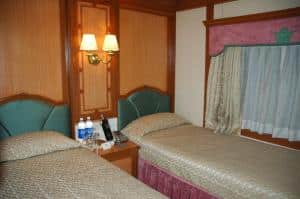 The opulent rooms on the Deccan Odyssey (photo courtesy of SITA)

Moving further south, across the red soiled plateau of the Deccan, this luxury tour of India starts from the port city of Mumbai and travels across Maharashtra state to Goa. The 13 carriages are styled after the forts and popular attractions along the path of the journey. There are presidential suites, as well as restaurants and a bar. If you’d like to get a spot of work in, there is a business facility, and for winding down, there’s even a spa and a gym. Besides the beaches of Goa and the forts in Sindhudurg, there are also halts to see the UNESCO World Heritage Sites, including the ancient Buddhist caves at Ajanta and the jaw droppingly beautiful cave temples of Ellora. 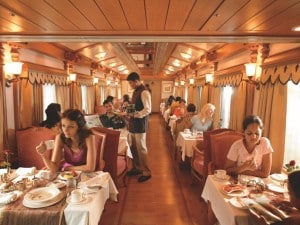 The sumptuous restaurant on the Golden Chariot (photo courtesy of SITA)

This 19-carriage luxury train is named after the Vittala stone chariot temple at the UNESCO World Heritage Site of Hampi. The train offers two routes in the south: “The Pride of the South” is a temple trail that goes through Hampi, Badami, Aihole, Shravanabelagola, Belur — all in the area of Karnataka state known as the cradle of temple architecture — and then ventures into the beaches of Goa. The “Southern Splendor” route follows the culture trail to the state of Tamil Nadu, to Pondicherry, Tanjore, Madurai, and into the backwaters of Kochi and Allepy in Kerala. Both routes take seven nights and eight days, departing from Bangalore on a Monday and returning on Monday of the next week.

Each train is outfitted with two restaurants, a lounge bar, as well as a spa and gym. Both will take you through enchanting temple towns, awe inspiring historical ruins, splendid palaces, as well as glorious waterscapes.

When you are ready to plan your India trip, please contact Susan Geringer at 877 255 7438 or visit www.staging.geringerglobaltravel.com